Will Doran writes something called “PolitifactNC” for The Raleigh News & Observer.  Supposedly, his aim is to help cut through the nonsense and propaganda of the election cycle.  But here he is on Twitter today: 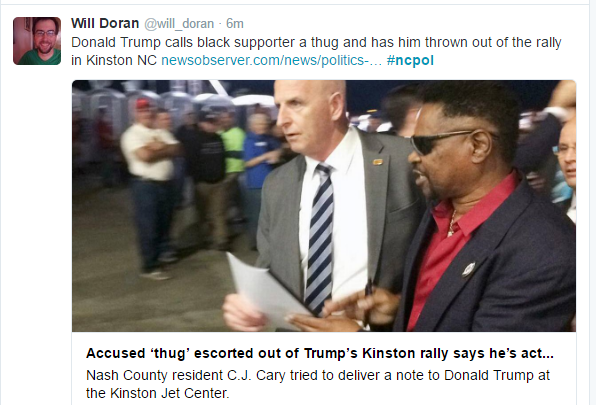 Did Trump actually do that?  Let’s turn to The N&O’s correspondent on the scene:

Cary says he wanted to deliver a note to Trump urging him to be less offensive and more inclusive to four demographic groups: black people, women, people with disabilities and college students. Cary, an African-American, says he’s an Army veteran who fought in Afghanistan.

He walked his way toward the front rows, stood about 20-30 feet from the stage and shouted “Donald” while waving his document to try to get Trump’s attention.

“He entirely mistook that and thought that I was a protester,” Cary said.

First, the guy comes within 20 feet of the stage while the man is speaking, starts waving a piece of paper and yelling Trump’s name, and can’t understand why he’s viewed as a potential threat?  Trump IS under Secret Service protection.  Go back and review 1968.   George Wallace AND Bobby Kennedy each got shot at campaign events.  Wallace made it.  Kennedy did NOT.  So, you can understand why people might be on edge at crowded presidential campaign events. (Especially THIS year.) Having attended multiple presidential candidate appearances, I can tell you it’s unwise to do anything to make the guys in sunglasses with guns jumpy.

Second, Trump did not call the man a thug.  He asked if he was paid $1,500 to be a thug.  The N&O writer does not bother to give his readers context for that question.  James O’Keefe’s videos revealed that North Carolina native Brad Woodhouse’s group paid people to incite violence at, and disrupt, Trump rallies.  The O’Keefe videos revealed that Woodhouse’s group hoped to have these disturbances turned into media events that get covered by the drive bys.  The disruption, instead of the actual content of the speech, becomes the news.

The N&O, like most in-the-tank scumbag drive by media outlets, has basically ignored those videos.  Brad Woodhouse is from the Raleigh area.  The N&O knows how to find Brad’s brother.  It would be interesting to hear what Brad has to say about the details in the O’Keefe videos.  But I won’t hold my breath waiting for that.