Margaret Spellings, the former federal education secretary who sailed into the UNC president’s post with the blessing of a bunch of GOPe types in Raleigh, has declared college to be a “right” for all North Carolinians: 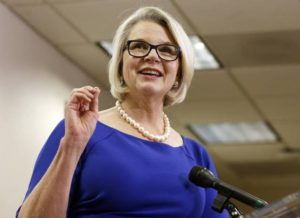 What if all North Carolinians reached their full potential? What would that mean for our state, and what would it take to get us there?

What if all of our citizens could get the kind of education they need? What would it mean for their lives and careers — for their families, for their children?

And what would that mean for our economy? For the civic and cultural life of our state? For our competitiveness and prosperity?

If those questions seem daunting, imagine what this university’s original charge must have sounded like back in 1776, when the ink had barely dried on the Declaration of Independence and Chapel Hill was still a tree-covered hillside. Our state’s founders declared, “All useful Learning shall be duly encouraged and promoted in one or more Universities.”

That, too, was a revolutionary idea. It was a monumental goal then, and it is an even bigger challenge to us now.

What is “all useful learning” for a student today?

We know the world is more competitive, and the best jobs of the future demand education beyond high school. We know there is promise and potential in every corner of this state — in every town, every district, every classroom. And we know that economic and social mobility help define the American Dream.

So, are we doing all that we can to create opportunity for everyone? To deliver on the promise of all useful learning?

We have a constitutional mandate to provide a quality education as free as practicable. At his own inaugural some 30 years ago, President Dick Spangler defined that promise simply: No one in our state is denied a college education because of lack of money.

Are we keeping that historic promise and living up to that ideal? Or has that challenge only deepened?

I don’t raise these questions because I doubt the greatness of the University of North Carolina. I raise them because I believe in it so deeply.

In the 18th century, North Carolina took the lead in recognizing higher education as the foundation of a free society.

Today, we must lead again in recognizing quality higher education as a new civil right — a vital part of our founding promise.

That means making education beyond high school possible for all. That’s never been done before — not here, not anywhere else. But it’s plainly needed if our state and our people are going to thrive in the century ahead.

We have one of the finest university systems in the country, what former President Bill Friday called a mighty engine, sustained by generations of hard work

But we also have too many citizens whose lives and ambitions are limited by geography, by income, by struggling K-12 schools or by tuition that seems out of reach. It can be easy to forget when you live in a thriving region or graduate from one of the state’s top high schools, but most North Carolinians don’t have a college education or the opportunities that come with it.

The opportunity to pursue an education beyond high school is far from equal across our state. A high school senior in one county can be twice as likely to earn a college degree as a classmate in a neighboring district. Statistics are not destiny, but a few miles can make a world of difference. We can’t allow a child’s future to be dependent on ZIP code.

Has this woman not heard of online education? We currently have soldiers sitting in Middle Eastern deserts attending college classes streamed over The Internet.  The Internet Age has pretty effectively knocked down all of the barriers associated with geography and zip codes.

Nor can we afford to let economic hardship limit potential.

Today we are leaving behind thousands of capable students who never even apply to college because it doesn’t seem possible for them. Low-income students enroll in college at far lower rates than their wealthier peers, even when test scores and academic performance are the same. That’s a tragic waste of talent, and we must do something about it.

At a time when our state and our nation are growing more diverse — when the school-age population in North Carolina is almost 50 percent minority and growing — we cannot tolerate pernicious gaps in opportunity.[…]

There are plenty of wealthy kids who get set up in sweet deals by their parents.  There are also plenty of people out there who didn’t have rich parents to help, but busted their butts, worked hard, and succeeded.   Ronald Reagan and Clarence Thomas, for instance.

My experience, as an instructor in higher ed classrooms, is that students with skin in the game tend to be the best, most serious students.  A popular scam on many campuses across the state?  Sign up for courses and attend them long enough to get your first financial aid check.  Then, disappear from campus never to be seen again.   Young people take better care of cars THEY bought as opposed to those provided by parents.  Homeowners tend to care for their residences much better than renters do.  All of this talk about “free college” coming from Team Hillary will likely be little more than chumming the waters for even more waves of freeloaders and scammers seeking to line their pockets with other people’s money.

[…] It’s time to raise our expectations again. Higher education is a new civil right. Every child must be able to reach beyond high school. That has to become our expectation, our promise for a rising generation.

That may mean a four-year degree, a master’s or a doctorate; it could also mean an associate degree or a professional credential. Whatever form it takes, quality higher education has become a critical measure of our standing in the world. After a century of leading the way, we’ve begun to fall back.[…]

This “fall back” is mostly due to a K-12 system that focuses on (1) teaching to the tests, (2) moving kids through the system to keep the government $$$ spigot flowing, and (3) nonsense like diversity and self-esteem.  Meanwhile, Chinese and Japanese kids are learning the skills they need to OWN US and RULE THE WORLD.

How about maximizing the value of a college degree?  The preponderance of useless degrees on college campuses — i.e., women’s studies, gay and lesbian studies, music, education, art, political science — churns out a lot of folks into the workforce who have no useful marketable skills.

Cutting some of that kind of fat out of the course catalog would likely cut the cost of doing business on the campus.  So would digging into the bloated salaries and benefits for college faculty and employees.  Paying someone six figures to teach SIX HOURS a week is a farce.  A travesty.

All of this talk of “a new civil right” plays right into the hands of leftists seeking a new entitlement to subsidize.  Not everyone is tailor-made for the ivory tower.  My high school had vocational programs aimed at training kids, who probably weren’t college material, in valued skills that could help them support themselves and their families.

I have a bachelor’s and master’s degree.  I can tell you that some of my most valuable knowledge came from life experiences OUTSIDE the classroom and OFF campus.  I began pursuing my MBA nearly 20 years after earning my bachelor’s degree.  Thanks to my two decades of work experience, I found myself knowing more about the course subject matter than many of my professors.

Declaring college to be a RIGHT is a dangerous misstep.  Just like driving a car, it is a PRIVILEGE that you earn.  I can see lefties taking her language and running with it — suing colleges for flunking students or denying them admission.

Instead of setting up a new “right,” why not focus instead on making college a more cost-effective, worthwhile endeavor?