We’re often accused around here of being too tough on the boys and girls at NCGOP HQ.  But — with what I saw on Twitter today, from the party’s new chairman — I think we may have to adjust our tune a bit:

Whaaaaaaaaaa … ????  Taking a slap at The Orange Man™ and defending one of our own.  Could you imagine something like this coming out of Robin Hayes, Bill Cobey, or Claude Pope?  Way to go, Hasan. 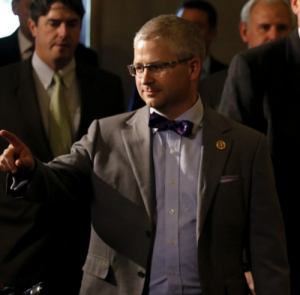 “The issue with Mark’s vote is that we have a rule vote, which is a shirts vs. skins vote. Republicans, if you’re in the majority, vote for it. That means you can control the debate. And if you’re in the minority, you vote against it,” McHenry explained on “First Talk With Hal Row”.

“Well, Mark voted against it. That is basically siding with the Democrats to hand over the House floor.” […]

Heritage Action ranks members of Congress on their conservatism — with 1 being flaming liberal and 100 being perfectly conservative.  Meadows got a ranking of 87 while McHenry pulled down a 68.  Now, which one of these guys is more faithful to conservatism and the GOP platform.  Hmmmm?

In addition to his vote against the rule last week, Meadows also drew scorn from GOP leadership when he didn’t cast a vote for John Boehner to be speaker. McHenry cited that as problematic.

“Mark also voted against the speaker. Look, we all can have a discussion about John Boehner, but he was the Republican nominee for speaker. And the opportunity to vote against him was in November when we had the nominating contest within the House Republican Conference,” McHenry explained.

McHenry likened it to a choice he faced during the 2008 general election. He was a vocal critic of Sen. John McCain, R-Ariz., during the presidential primaries but eventually voted for him.

“In 2008, John McCain was not my choice to be the Republican nominee for president but I voted for him in the general election because the choice was Barack Obama vs. John McCain,” McHenry said. “We had a similar situation on the House floor. We can all come to different conclusions, but those are the facts as I see them.”

NOT the same. I’m going to have to call BS here.  Meadows voted for a Republican alternative to Boehner.  NOT Nancy Pelosi.

6 thoughts on “#ncgop: Now THIS is what we’re talking about !”