The crazy vote in the House Finance Committee to allow illegal aliens to drive just won’t go away.  With no official tally of yeas and nays, and chairman Bill Brawley’s decision to have members vote by standing or sitting (instead of responding to a roll call with a yea or nay), things have been pretty confusing.

Folks in the committee room audience compiled lists of Republicans who stood for ”all opposed”.  FOUR DIFFERENT (independent) SOURCES IN THE ROOM came up with lists of yea votes that included Brawley and Rep. Charles Jeter.  Brawley, who was chairing the meeting, claimed in an email to us that he didn’t actually vote.  But video of the proceedings showed him standing during BOTH the yea and nay questions.

Jeter has been especially persistent about making his “no” vote clear.  He’s gone as far as asking two other GOP legislators who sat adjacent to him to send emails — after the fact — verifying his vote. (Isn’t it amazing that our legislature is documenting its business this way?  Seriously.) 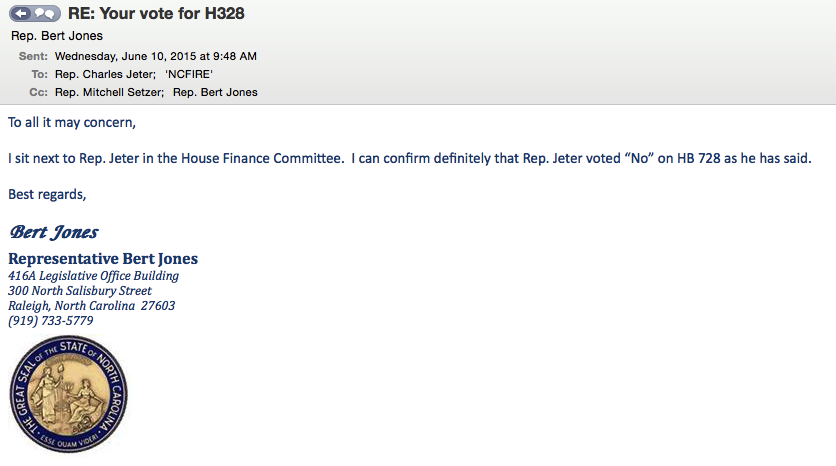 OK.  We like Rep. Jones around here.  He is typically on the right side of issues.  But, again, why is House business being conducted like this?

Ok.  Got all that?  So, Jeter voted against a bill granting licenses.  But he ALSO voted AGAINST Rep. John Blust’s amendment that completely struck the whole driver license deal from the bill. So, we have a real *profile in courage* here.  Taking both sides of an issue. Here’s more Jeter, in response to another reader on our site:

The only time the bill came up for a vote, I voted no. The Blust amendment was imperfect in my opinion and I voted no. I then stood up and voted against the bill. I realize there are passionate feelings on this issue, but don’t target those on the same side with you by friendly fire.

What was “imperfect” about the Blust amendment, Charlie?  You can have all the space you want in the reply section of this post.  The voters want to hear from you.

Here’s another thought. If I had four independent witnesses in the committee room who got, um, “confused” about who voted which way, what’s to say that these two legislators — Setzer and Jones — didn’t get,um,  “confused” as well?

(What’s so hard about calling a legislator’s name, and having them answer ‘yea’ or ‘nay’?)

THIS is why we write important stuff down.  Of course, it helps to not write stuff down that you don’t want to have to answer for down the road.

3 thoughts on “#ncga [Jeter: Setzer and Jones saw me say NO]”