The Paul Tine defection couldn’t have come at a better time for the drive-by media and the political chattering classes.  The General Assembly is not yet in session.  Things were a little slow around Jones Street.

Tine, a Democrat legislator from Dare County — who shares quite a few policy positions with Kay Hagan and donated heavily to Barack Obama — decided he was no longer at home in the House Democrat Caucus.  It appears Democrats will be banished to the minority in that chamber for a long time.  Republicans have a veto-proof majority.  And — as Republicans knew for the past several decades — the majority make the rules and rules the roost while the minority gets to pout in the corner.

Tine announced that he would register as Unaffiliated, and not Republican.  He also announced that he would not be changing his positions on issues — which have been, for the most part, doctrinaire Democrat.  Basically, he left the Dems — according to the drive-bys — because they shot him down on some of his ideas.  No mention of what said ideas were.

Late in the week, we got word that the unaffiliated Tine was admitted as a member of the House Republican Caucus.  All of this gins up some really interesting questions:

Tine has come over to the GOP caucus because he felt slighted by his Democrat colleagues.  What happens if his fellow caucus members decide      not to go along with, say, his Equal Pay for Women Act?  Does he go running back across the aisle?  If Tine was acceptable, why not uber-liberal      Democrat legislator Paul Luebke?  Let’s say he gets bored with being in the minority, and decides he — too — wants to enjoy the benefits of          membership in the majority caucus?  The precedent has been set that you don’t have to accept the GOP platform or even switch your registration to Republican.

3. Why did House Republicans agree to this?  Rep. Larry Pittman (R-Cabarrus) told us on this site that 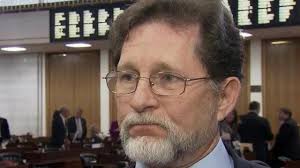 The majority is already veto-proof.  They don’t NEED Tine.

I know there are many caucus insiders who read this site and –sometimes — comment.  Some of them even occasionally feed us tidbits. It would be nice to hear from speaker Moore or leader Hager officially — or from some of these other folks unofficially, on background — about the meat-and-potatoes of the decision on Tine.

8 thoughts on “The (“unaffiliated”) donkey in the room”