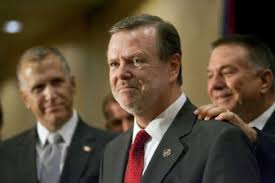 The past legislative session was marked by the GOP-dominated House and the GOP-dominated Senate often taking different paths.  It appears that trend is continuing here out-of-session as the leaders of the two chambers appear to have different approaches to the newly-discovered “right” to gay “marriage” in North Carolina.

State House speaker Thom Tillis — the GOP’s standard bearer in the US Senate race — filled out a candidate questionnaire from the NC Family Policy Council.  He reportedly did not answer a question about whether he thought homosexuals should become a protected class (like blacks and women)  under federal anti-discrimination laws.  This didn’t sit well with our friends at The Triad Conservative:

[…] Thom Tillis did not respond to four of the questions.  But there was one particularly important question for which he “took the 5th”.   It was question #6:

Should the terms “sexual orientation” and “gender identity” be included as protected classifications in federal anti-discrimination laws?

Why would Tillis have such a difficult time openly opposing this kind of law?

Tillis might be in a good position to win his election at this point because citizens are rapidly becoming quite disgusted with Obama.  That affects the senate race.  The Democratic turn-out machine, of course, is always a factor.

But if Thom Tillis wins, what will we have at that point? […]

Meanwhile, state senate president pro tem Phil Berger (R-Rockingham) called a press conference denouncing the pressure being put on court officials and registers of deeds over the new gay marriage federal court ruling.  He promised to introduce legislation in the upcoming  session to ensure religious convictions of court officials and registers of deeds  would be respected if they refused to participate in gay marriage-related matters.

We here at Haymaker HQ applaud senator Berger for his courage and stance on this issue.  But we honestly believe he should take things one step further.  Start the process of getting the State of North Carolina OUT of the marriage business.

Remove marriage and any marriage-related activities from the job descriptions of magistrates and other court officials.  Reform state tax code to a flat rate that does not differentiate between married and single people. Marriage has been twisted by the statists to become a new venue for squeezing some cash out of the welfare state.  Get the state out of it.  Return it to what it has been since the beginning of time — two people formalizing a contract between themselves and their God.

When marriage is no longer a vehicle for sucking more of other people’s money into your pockets,  let’s see how important this so-called marriage “right” truly is.

7 thoughts on “#ncpol: A Berger-Tillis split on gay marriage?”