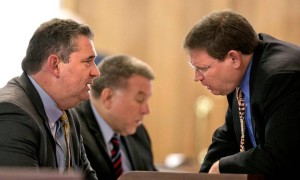 It’s sad, but you come to expect lying from elected officials.  But sometimes the lying gets to be a little too much to stomach.  As an example, let’s look at two of the latest campaign ads — one from state Rep. Nelson Dollar, and one from state Rep. David Lewis.

Let’s start with the Lewis ad. Here’s one of the more outrageous lines, coming straight from the mouth of the Rules Committee chairman himself:

[…] I cut taxes by over a billion dollars. I slashed unemployment by almost half.  And it’s why I roll up my sleeves each day to do more.”[…]

It’s, um, strange.  He didn’t bother to mention his rare accomplishment of having NOT ONE but TWO pay-to-play ethics complaints / allegations leveled against him by h

is own party.  Or the fact that he was the only Republican House member to support taking Obama’s money to get ObamaCare up and running. Or the fact that he watered down and basically screwed up the voter ID legislation.  Or screwed a bunch of counties out of their sales tax revenue.  Or ushered in those affiliated committees in the middle of the night.  *I can’t imagine WHY he wouldn’t want to boast about THAT stuff.*

Now. Let’s move on to Nelson Dollar.  Ol’ Nelson is beside himself.  He actually has a primary opponent.  *How rude!*   Mark Villee has a reputation as a church-going, hard-working family man and an all-around nice guy.  But to listen to the actors in Nelson’s latest ad, you’d think he was the biggest dirtbag on the planet. Here’s a sampling:

“Mark Villee sure lies a lot … He’ll do anything to get elected … Like run a smear campaign … Mark Villee even attacked Nelson Dollar’s wife.”

The actors go on to praise Dollar for “cut[ting] taxes” and ”eliminat[ing] government waste.”

*Gee.  I wonder how that squares with the fact that Nelson wanted to spend A BILLION more than ANYONE ELSE in the legislature wanted to spend?  Or that he fought tooth and nail against ANY CHANGES to Medicaid?  I’d dare say you could find some waste, fraud and abuse there.*

And it’s also quite ballsy to accuse your opponent of running a “smear campaign” when — in the same ad — you say he “sure lies a lot.”

The “attacks” Nelson and his actors keep referring to don’t come from Villee.  They come from http://www.stopnelsondollar.com — a PAC started with seed money from businessman Bob Luddy.  By law, Villee can’t even talk to those people.  And there’s no evidence he has.  If Dollar has evidence, he needs to file a complaint with elections authorities post haste.  (I can’t control the actions of every Haymaker fan out there. It’s unreasonable to expect Mr. Villee to do the same with people who share his goal of dethroning Mr. Dollar.)

The “attacks” on Dollar’s wife, Lorrie, are also debatable.  While ol’ Nelson has been slaving away on Jones Street for $13-grand, his wife has been bouncing between six-figure government jobs.  At one point, she was coming before her husband’s committee for appropriations requests.  Lorrie Dollar also inserted herself into the no-holds-barred political arena when she sicced the FBI on retiring senator Bob Rucho.

Nelson Dollar is a creature of government.  His only “job” outside of Jones Street is a  “marketing firm” run out of his home which pretty much counts a few House colleagues as its client base.  Listening to him whine about being targeted by a puppet candidate controlled by a rich guy is also laughable.  In 2004, that was HIM — running against then-Rep. David Miner and bankrolled by Art Pope.