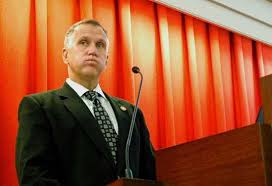 The snow has captured everyone’s attention statewide over the last few days, but this managed to slip in under the radar:

The state’s $550 million plan to add Interstate 77 toll lanes from Charlotte to Mooresville is on track to begin this fall.

On Friday, the N.C. Department of Transportation plans to issue a final addendum to its request for proposals to finance, design, build and operate the lanes, DOT spokesman Jamille Robbins said.

In mid-March, the department expects to receive final price proposals from potential bidders, he said.

Whoa.  “The fall” means September, October and NOVEMBER.  There’s a major election in November, boys and girls. I can think of one person who really doesn’t want a discussion on toll roads prior to said election. What do you want to bet work gets pushed back to after the November vote?

The contract will be for 50 years so the contractor can recoup its investment, state officials have said.

While the private contractor will finance most of the project, the state plans to contribute $170 million toward the cost.

The project calls for adding two toll lanes on northbound and southbound I-77 between Brookshire Freeway in Charlotte and Exit 28 in Cornelius. One toll lane would continue in each direction from Exit 28 to Exit 36.

The state intends to open the lanes in 2017, according to the DOT’s latest construction timetable.

Traffic in the corridor has increased at least 4 percent in each of the past five years and is expected to rise 2 to 3 percent annually through 2030, according to the state.

“These are not your parents’ tolls of 25 cents into the basket,” the group says on its website. “The cost for these tolls from Mooresville to Charlotte could cost $5, $6.50 and up to $16 or more each way.

“Drivers are given the choice to sit in even more congestion in the two lanes you have today or pay the high price to use the tolls. These lanes are nicknamed ‘Lexus Lanes.’ Do you want to pay $10 a day for your work commute or to get your kids to school and activities – on top of gas and other fees (including N.C.’s highest gas tax in the Southeast)?”

State officials have said they don’t know how much the toll rate would be but that it would vary depending on traffic congestion.

State House speaker Thom Tillis has been an outspoken advocate of toll roads and HOT lanes.  The NCGOP approved a ‘no tolls’ plank in its party platform at the 2013 state convention.  Tillis fought the measure, then went back to Raleigh to push legislation allowing tolls through the House.

We’ve since learned that a law firm owned and managed by Tillis’ brother-in-law represents Parsons-Brinckerhoff, the consultant managing the HOT lane / toll projects in North Carolina.