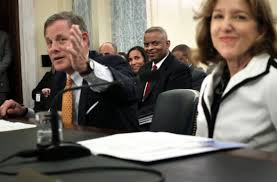 From my time in the drive-by media — and a brief stint on Capitol Hill — I got an up close and personal look at the confirmation process.  A nominee is presented to the respective committee.  (In the case of judges, US attorneys, and other senior federal law enforcement officials, the Senate Judiciary Committee is the appropriate venue.)

At the committee level is supposedly where the due diligence takes place. A very significant factor in these matters is the feelings of the senators from any state directly affected by said appointment.  If either senator objects, legislative courtesy calls for the nomination to be held up until that senator’s objections are addressed and satisfied.

In the case of Max Cogburn — the, um, :”father” of legal gay marriage in North Carolina — the lefties are pointing out that Cogburn was praised before the committee by both Kay Hagan AND Richard Burr.  THAT is usually a good indicator — barring any major controversies that may arise — that the nomination will make it to the Senate floor.  Usually the full Senate is presented with a slate of nominees to vote on.  A positive report from the committee — coupled with the approval of BOTH senators from the affected state — usually means smooth sailing on the Senate floor.  In Cogburn’s case, he sailed through by a 96-0 margin on the Senate floor.  I am sure Burr’s endorsement played a huge p

As a senator, it is awfully hard to oppose a nominee by a president of the opposing party  when said nominee is being praised by members of YOUR party.  Especially a member of your own party from the state most directly affected by the nomination.

In DC, most of the verbal combat you see on the news is pure show.  Most of them are buddies.  They attend the same cocktail parties.  Their kids go to the same private schools.  They scratch each other’s backs.  The whole partisan thing is a show for the rubes back home.

I know many a “good guy’ — as Burr described Cogburn — who I definitely would not want in a position of influence.  Wouldn’t it be nice if governmental appointments were made with the same considerations given hirings in the private sector?

You’re kidding yourself if you think Tillis would be immune to this kind of thing.  It came out via the drive-bys that Tillis  based his decisions on who to have run the UNC system on how much money the candidates contributed to him.