If you didn’t get enough excitement from last night’s extravaganza in Davidson, flip on over to Raleigh’s WRAL TV tonight for Round 2. Mark Harris really fumbled a great opportunity last night.  We fought hard to get him into tonight’s event.  The preacher needs to show up ready to rumble.

The candidates need to unite on the idea of not letting the drive-bys set the agenda. THE issues everyone has on their mind are ObamaCare AND the economy.  Binky and Miss Laura will TRY to spout off on puppy mills, gay marriage, medical marijuana, and guns for mental patients.  Very few people are basing their votes on any of that.

Heather Grant and Greg Brannon — by virtue of their employment in the medical field — are well positioned to talk in detail about how DC is screwing up healthcare and screwing over their patients. They can tie that to the fact that Kay Hagan gleefully heaped all of this mess on us ( and Speaker Thom pushed the idea of health exchanges at the state level).

Some people think Thom Tillis is smart by aiming his fire at Hagan.  That’s nice, but there’s no 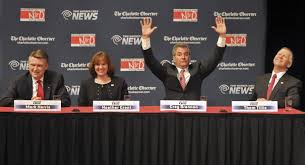 need to sell the public on how bad Hagan is.  Polls show that my dog could beat Hagan. People want to hear about your principles and your ideas about turning the country around.  Tillis has been pushing the idea of “bipartisan cooperation.”  That’s fancy, big-city talk for backing off repealing this whole ObamaCare thing, and giving Harry Reid and The Chamber what they want with amnesty.

If you get deep, down to it — people are more interested in the idea of self-government, and not partisan government.  Who is really interested in having one group labeled Democrat and one group labeled Republican taking turns busting the budget and increasing the size and scope of government? People want to be left alone by Washington.  They want DC to protect them from external threats, but they want to make most all of the other decisions affecting their lives close to home.

Mark Harris stumbled on to something with his ”no-baggage” theme.  A lot of viewers of last night’s extravaganza saw Harris as too much of a spectator who, more than once, appeared to buttress Tillis’ spin.

The spin about Tillis as Mr. Inevitable is specious, to say the least.  Speaker Thom has 60 percent name ID, but only about 20 percent of the vote.  That screams out that people KNOW him, but aren’t sold.  The primary electorate is mostly conservative — more likely to be aligned with Greg Brannon or Mark Harris.  Creating enough doubt about Tillis could likely force a Brannon-Harris runoff and change the dynamics of this whole thing dramatically.

Tillis tells people there is little difference between himself and his rivals on the issues.  Actually, there is a strong case for comparing Thom Tillis to Richard Nixon.  Nixon started off as a hard-nosed right-winger while in Congress and as Eisenhower’s VP. He mutated, as president, into the guy who blessed us with the EPA, price controls, and a whole lot of liberal Supreme Court justices. Like Nixon, Tillis doesn’t have any hard core principles and will position himself as whatever he needs to be in order to rake in the cash and keep his hands on the reins of power.  And, like Nixon, he’ll do whatever he has to in order to protect that political capital.

A Senator Tillis will be a lot like Richard Burr — standing politely behind Mitch McConnell at the press conference nodding approvingly and sympathetically as ol’ Mitch tells us how raising the debt ceiling and tweaking ObamaCare will be good for us.  Do we need to give McConnell, McCain and Graham one more member of their entourage — or do we need someone who will rock the boat and try to force DC to get back to The Constitution and to act in the interests of the people back home?