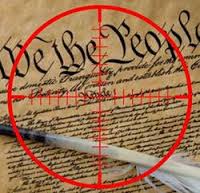 One of the few flashpoints in last night’s GOP candidate’s forum came when the discussion turned to gun rights.  The drive-by questioners, of course, took the lefty route by alluding to recent high-profile mass shootings when asking about barring felons and mentally ill people from purchasing guns.

Three of the four candidates — Greg Brannon, Mark Harris, and Heather Grant — cited those concerns.  The fourth, noted paintballer Thom Tillis, seized the low-hanging fruit and patronized the audience by declaring he was not going to give loonies guns (as though that’s what the other three wanted to do).   Tillis tried to refute claims he was soft on guns by highlighting his endorsement by The National Rifle Association.

Well, well, well.  That opens the door for a whole new angle of discussion.  There are actually three major gun owner advocacy groups in the United States — The NRA, The National Association for Gun Rights, and Gun Owners of America.   Tillis got the NRA’s nod, but the other two groups have given their blessing to Dr. Greg Brannon. 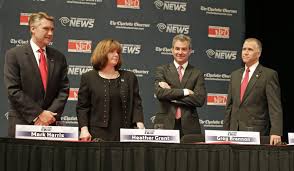 Why are there three groups?  Many people who HAD been NRA members got angry about the organization’s efforts to moderate, be bipartisan and become part of the in-crowd in DC.  The NRA’s endorsements of lefties like Harry Reid and Ohio Gov. Ted Strickland got to be too much for some longtime NRAers, who divorced themself from the organization and went off on their own.

Everyone knows the economy and ObamaCare are the top issues on the minds of the voters.  But the media won’t allow either of those to dominate their televised dog-and-pony shows.  Their gal Kay is weak in both areas.  And her drive-by media fan club wants to help her by changing the subject.

Tillis’ on-air shuck-and-jive comments about limiting gun purchases may have scored some points for him with the drive-bys, but they have also ignited a firestorm among politically-active gun owners.  The National Association for Gun Rights has already broadcast a blistering attack on Tillis

9 thoughts on “#NCSEN: 2nd amendment in the crosshairs”