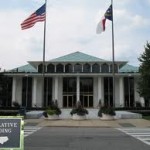 Some observers though the GOP establishment in Raleigh might have bought off The John Locke Foundation when Gov. McCrory named Art Pope as his budget director.  But, apparently, nobody told JLF’s Sarah Curry anything about sweeping stuff under the rug.

Curry has done some excellent work shedding light on some of the financial shenanigans on Jones and Blount Streets.  She pointed out the fact that – – while the GOP-controlled legislature was taking credit for a “conservative” budget — spending outside the general fund was exploding.  Now, Ms. Curry comes with a report suggesting some, um, “creative” accounting by state government when it comes to budgeting and borrowing money:

Most of us have jobs, and with those jobs come certain benefits, most noticeably healthcare and retirement benefits.  The same is true for state employees.  Public school teachers, judges, elected officials, NC National Guardsmen, sheriffs, community college and university employees, registers of deeds, law enforcement officers, and many other state employees are offered a variety of benefit plans as part of their employment.  The difference between most of our benefits and those offered by the state is that the private sector found a way to offer these services in a manageable way, while the state is racking up billions of dollars of debt that doesn’t even count as ‘real’ debt.

Real debt?  Has she got your attention?  Sit a spell.  There’s MORE:

Let me explain.  These benefit plans are considered by the State to be liabilities, meaning they are payments

that must be made using state tax dollars.  While the General fund has a specific amount of debt capacity it can manage, pensions and benefit plans are not within that capacity.  Benefit plans are not considered “hard” liabilities, because they are based upon estimates of costs the State will incur in the future and because the payment timetable is uncertain.  Since these liabilities are not part of the State’s debt capacity calculation, any unfunded obligations do not represent a hard liability in the same way debt service does.  So in essence, these future payments funded with tax dollars to retired state employees are hidden from the General Fund’s accounting ledger and are putting a large burden on future taxpayers in North Carolina without them even knowing.

*Nice.*  So, the “honorables” in Raleigh are playing the same game DC is.  I believe there is someone trying to move up from Raleigh to DC who has been right in the middle of this sneakiness. MORE:

While offering both retirement and healthcare benefits to employees is a reasonable and expected part of employment, the State needs to re-evaluate its method of paying for these benefits.  There are two main ways these benefit plans can be maintained for future generations of state employees while still offering the benefits promised to those who have already retired.  First, changing the way these plans are funded and second, changing the way they are paid to retired employees.

Funding is usually the first discussion, since it is an immediate decision made with current tax dollars and any changes will impact the current fiscal situation of the State.  The State has fully funded the annual required contributions for the state’s largest pension plan for 71 of the last 72 years.  Unfortunately, the State Health Plan is not in the same situation.  The current funding level of the health plan is only 3.2 percent, amounting to an unfunded liability to taxpayers of $23.1 billion or $2,347 per capita.  In case you forgot, the entire General Fund is $20.1 billion, so that’s $3 billion more than the General Fund – yikes!

The current funding level for the State Health Plan, unlike that for the pension plans, is determined by the General Assembly and not based on an actuarial amount, or an amount calculated to include future payouts and market fluctuations.  Last year the legislature mandated a 5.3 percent contribution based upon active employee salaries, which was around $410 million.  It sounds like a lot of money, but when you consider there are only 342,733 active plan members paying into a plan that is paying for 528,114 active and retired employees, it’s not sustainable.  If the State Health Plan had been funded with an annual required contribution as the pension plans had for the last few decades, then there is a possibility the State Health Plan would be much better funded and less of a liability to taxpayers.

The other option is to change the way payment is given to retired employees of the state.  The current system is working as a defined benefit plan, meaning the benefit paid to employees is defined by a formula consisting of salary amount and duration of employment.  This means that if the plan does not have enough to pay this predetermined amount to retirees, the State must make up the difference from tax revenue.  The alternative is a defined contribution plan, similar to a 401k.  These plans set aside a certain percentage from each employee’s salary, and when the employee reaches retirement he receives the amount contributed plus any earnings made on the investment during his time of employment.  If the pension plans were to switch the way benefits were paid, it would help the State plan for the investment needed to make future payments while also reducing the risk of future unfunded liabilities to taxpayers.

The biggest problem is that the State has over $27 billion in pension and healthcare liabilities that isn’t considered debt.  When lawmakers or citizens look at the state budget, they can see the debt service amount and know how much is being taken away from other government services to pay for that debt.  These liabilities are hidden in supplemental financial statements and not considered when the State calculates its debt capacity.  Regardless of what changes are made to make these benefit programs more affordable, this is REAL debt and must be managed as such.  Healthcare and retirement benefits are only going to become more expensive and require higher levels of funding in the future – North Carolina needs to make a change before it’s too late.