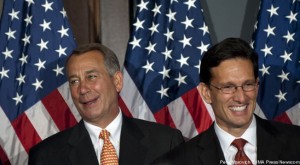 American Hustle is not just lighting up the movie screens.  It’s playing out on Capitol Hill as well.

Following last week’s disgraceful surrender by House Republicans on the debt ceiling, we got all kinds of stories about how Howard Coble was the only NCGOPer to vote for Boehner’s bill.  Actually, it appears that most Republicans voted to allow others to raise the debt limit, and then turned around and voted against the debt ceiling increase.  Like John Kerry, they were FOR it, before they were AGAINST it.

How did this all go down? Pull up a chair.  Class is in session.

House rules call for a 2/3 vote in order to consider any debt related issues.  Well, somebody introduced H.R. 475 on February 11. Check out Section 4 of that legislation:

[…] The requirement of clause 6(a) of rule XIII for a two-thirds vote to consider a report from the Committee on Rules on the same day it is presented to the House is waived with respect to any resolution reported through the legislative day of February 12, 2014, providing for consideration or disposition of a measure relating to the public debt limit.

So, the “honorables” basically cancelled out the requirement for two-thirds to approve consideration of a debt matter on the House floor.  The cancellation was from February 11 through February 12.  Guess what got voted on February 11th?  That’s right.  Boehner’s “clean” debt ceiling increase legislation.

Let’s take a look at exactly WHO voted FOR this weasel move.    Well, lookee here.  Every North Carolina Republican — except Walter Jones — voted FOR HR 475.  It looks like Jones and Coble were the ONLY two Tar Heel State Republicans who remained consistent.  Jones opposed the 24-hour rules change AND opposed raising the debt ceiling.

(That had to get under Boehner’s skin.  Walter has been doing that a lot these days.  That’s probably why he’s got a primary opponent who parachuted in from DC to try and take him out.  In 1992, the Bush reelection campaign had a slogan:  Annoy the media, Re-elect Bush.  The 2014 version of that slogan could be: Annoy Boehner, Re-Elect Walter.)

Coble supported changing the rules for one day AND supported raising the debt limit.  All the rest of our Republicans split their votes.  They gave Boehner what he wanted on February 11, then put on a show for US with their no-votes on the debt ceiling increase.

Those NO votes on the actual increase didn’t matter.  The deal was already done with HR 475.  Most all of the Democrats were FOR raising the debt limit.  With the two-thirds requirement gone, all Boehner and Cantor needed was to peel off a couple dozen GOP votes to go with those Democrat votes.  And the deal would be done.  And the NCGOP coughed up EIGHT for them.

We’ve been played like a Stradivarius.  In fact, they’ve been doing this to us since we gave them the House in 2010.  We’ve got some primaries coming up in May that will give us an opportunity to show how little we appreciate it.

16 thoughts on “The debt ceiling: We were tricked, y’all!”