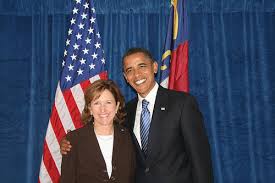 Seriously.  That’s how the BarryO fan club is defending their pet monster against accusations, and a CBO report, suggesting that it will kill jobs by the millions.

Kay Hagan has told us time and again that we’d learn to love ObamaCare –– if we just took time to understand it.  After months and years of rapidly increasing premiums, policy cancellations, working hour cutbacks, weak economic growth, and record unemployment, we understand it far too well.

John Boehner, Eric Cantor, Mitch McConnell & co. are using the CBO report to attack ObamaCare and score points against Big Barry. Yet, all three of those guys turned their backs on efforts by Ted Cruz, Mike Lee, Rand Paul and a handful of GOP House members to try and defund ObamaCare implementation. Mark Meadows (R-11th) was the only member of the North Carolina congressional delegation who had the guts to stand and fight at put-up-or-shut-up time.  Renee Ellmers said she was “absolutely not” interested in joining the defund fight.  In fact, she held town hall meetings arguing vociferously against it.  Richard Burr told us defunding ObamaCare was ”the dumbest idea.”  Now, he’s gotten behind a supposed alternative to ObamaCare that keeps intact a lot of ObamaCare’s most nightmarish big-government provisions.

Thom Tillis, backed by Boehner, Cantor and McConnell and seeking to replace Kay Hagan in the US Senate, was telling people  during Ted Cruz’s defunding fight that it’s not a question of whether we’re going to get ObamaCare, but HOW we are going to “manage” it.

What do we do when we are “represented” in Washington by two parties who basically offer two slightly different flavors of government dependence? We’ve got two incredibly powerful opportunities to do something about it in May and in November.

Pay no attention to the dishonest campaign propaganda talking about how Ms. and Mr. Incumbent has been “fighting for you.” Likewise for the regurgitated press releases in the pages of McClatchy publications or on the airwaves of WRAL.

Do your homework.  Read this site and others like it.  Talk to your friends and neighbors.  Educate yourself.  Don’t vote for someone because they were nice to your kids or got you that check for your non-profit.  These people are perpetuating a system that is sliding our nation deeper into a rat-hole of debt, and eating away at our freedoms like termites on a 2 x4.

In May and November, we have an opportunity to liberate a lot of these people — in DC and Raleigh — from the “shackles” of employment.

4 thoughts on “O-Care: Liberating you from the, um, shackles of employment”