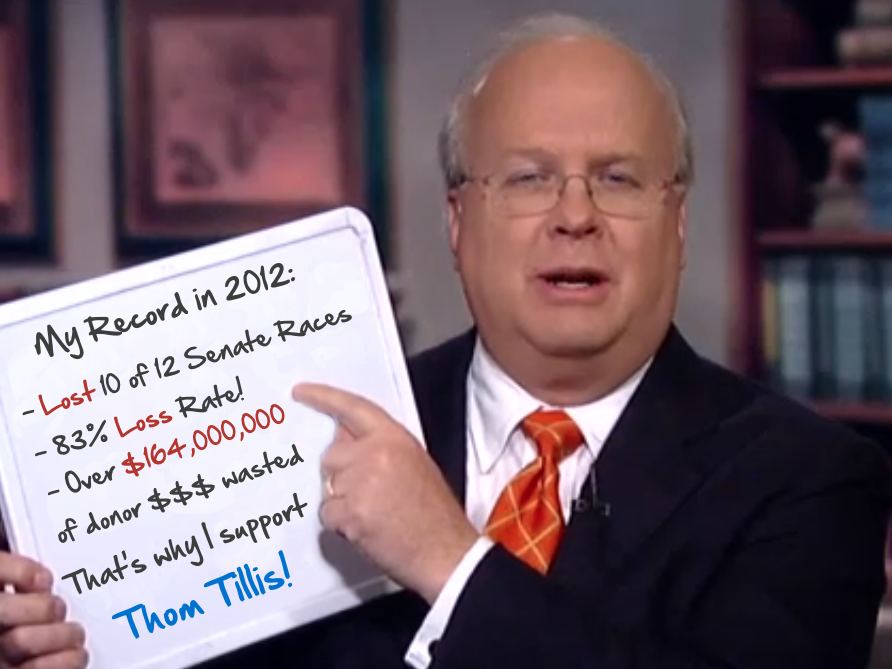 The shih-tzu included some recent polling on the Republican US Senate race in his “Morning Memo” this AM.  Karl Rove’s Crossroads super PAC issued polling results from their own survey showing Karl’s man Thom Tillis tied 44-44 with Kay Hagan.  What made the poll even more interesting is that the only other head-to-head matchup results released were Mark Harris (40%) vs. Hagan (44%).

Why release hypothetical November matchup results when filing hasn’t started and we still have a May primary election?  Every other poll I’ve seen has Tillis and Greg Brannon at the top of the GOP heap.  Was a hypothetical Brannon vs. Hagan matchup tested?  If so, why weren’t the results released?  If not, why not?  Harris is regularly polling at the back of the pack.  Why single him out?

I had a few theories about all of this, which I bounced off of a few fellow “political combat” veterans.  Here are some of the more plausible thoughts we came up with:

1.  Tillis still needs to nail down the greater Charlotte area.  Yes, he does have one of the top jobs in Raleigh.  But unlike Dan Forest and Pat McCrory, who ran statewide, Tillis has only been voted on by a section of Mecklenburg and Davidson counties — a small sliver of the state’s population.  He’s a household name to people who live and breathe state politics.  There are likely plenty of places within Mecklenburg County where you may hear perplexed and confused people ask ” Thom, who?”

We published a story earlier about some other polling we had seen on this race — one sponsored by a political party, and the other by an independent organization not connected to any candidate in the race.  These two polls concurred that Mark Harris is pulling potential Tillis votes in the greater Charlotte area.  Mark Harris, via his church work, is well-known and respected in the Greater Charlotte area.  He provides a safe alternative for Charlotte area voters who may want to pull the lever for one of their own — without having to hear his name mentioned in the same breath with terms like “lobbyist sex,” ”pay-to-play”, “Richard Morgan”, “Steven LaRoque”, toll roads, Time Warner, and “business relationship” among others.

One possibility advanced by one of my confidants — which I found plausible — is that this survey was meant to demonstrate to Charlotte area voters sitting on the fence trying to decide, between Tillis and Harris, that Tillis would be the, um, “stronger” candidate in November against Hagan.

Tillis has been getting a lot of grief lately about skipping candidate forums.  His campaign dismissed the events as not authentic GOP gatherings.  But it was hard to use that line when he skipped out on the Forsythe County GOP candidates forum.  After that event, I decided to do the job Binky, the shih-tzu and Sleepy Morrill should have done.  I asked: Where was Thom that night?

My eyes-and-ears in Mecklenburg informed me that ol’ Thom was at the regular monthly meeting of the North Meck Republican Women.  Hmmm.  Why would Mr. Inevitability skip an opportunity to put himself in front of voters in Forsythe County, who may not know him so well, to attend a local function not far from where he lives?

The polling I’ve seen — and the things I’ve heard from Mecklenburg sources — tells me that Mr. Speaker still has a good bit of work to do in his home base.  We’ve heard from a number of Cornelius residents — some living right down the street from Thom and Susan — who are expressing the opposite of love for Karl Rove’s man and the media’s Mr. Inevitability.   Three of them voiced their feelings about The Speaker in the comments section at the end of this post.

2. The poll is serving as a shiny object to distract, captivate big donors who haven’t yet been shaken down by Rove and the Tillis machine. Crossroads likely cherry-picked numbers from the survey that fit their narrative.  It had to surprise them greatly that Mr. Inevitability was only showing a tie against Chuck Schumer’s Sock Puppet.™  Rove’s money men can go to their  donors with a real-live bona fide poll showing their guy hanging tight with Miss Kay.

But why no mention of the performance of this Brannon guy who has caught the attention, and earned the endorsement, of conservative and Tea Party stalwarts like Rand Paul, Ann Coulter and FreedomWorks?  If the survey had showed Brannon performing poorly, they would have eagerly released that info to the public.

3. The poll facilitates the establishment / media narrative about the GOP race being Tillis vs Harris.   This was another interesting line of thinking that came up in our discussions.  Despite Harris polling dismally — the two polls I cited in my earlier post had him basically invisible in eastern North Carolina — the media keeps portraying him as hot on the heels of frontrunner Thom.

Harris is portrayed as a potential Tea Party leader and an attraction for social conservatives.  But that spin weakens when you point out that Harris’ campaign chairman is Robin Hayes, purveyor of this rant and most recently of the NCGOP chairmanship, the Raleigh & DC establishment, and the liberal Ripon Society (which has long sought the exorcism of social issues and The Religious Right from the GOP).  The campaign staff is made up of a lot of 20-something Hayes disciples from his days as NCGOP chairman.  The campaign’s consultant is Georgia resident Tom Perdue, known best as chief strategist for Robin Hayes and a long list of other RINO / establishment southern Republican politicians.

Some have theorized that Harris was injected into the race to divide the conservative vote and aid the Tillis campaign.

Problem:  Harris is causing problems for Tillis in their shared neck of the woods.  Plan B for the establishment must be to maneuver Harris into the #2 position in the field — hoping that he’ll eventually self-destruct as a result of (a) speaking in tongues, (b) charming snakes, (c) condemning homosexuals to the fire pits of hell, or (d) all of the above.  THAT would leave Speaker Thom free to leisurely coast past the checkered flag in May and head for the next lobbyist meet-and-greet.

8 thoughts on “#NCSEN: How to read Karl Rove’s silly poll”