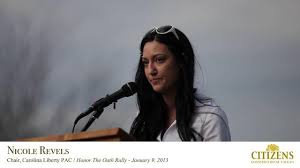 Citizen-journalist Nicole Revels — who produced the much discussed fisheries policy documentary currently burning up our comments section — is now turning her focus on the top man in the NC House of Representatives.

In her video, Revels displays a passage from a Coastal Conservation Association of North Carolina newsletter which reported the following:

[…] House speaker Thom Tillis (Mecklenburg) has directed Representative Tom Murry (Wake) and Representative Tim Moffitt (Buncombe) to lead the game fish efforts in the North Carolina House.  Through their leadership, we have been contacting both House and Senate members to gauge their support and enlist bill sponsors in both chambers. CCA-NC is encouraged by the support we are receiving, especially in the House. We recognize that the Senate will prove more challenging as there are some senators who have expressed support for the commercial fishing industry on this issue. However, we are working with several members of that body to make sure we will be ready to proceed.” […]

The legislature is not in session, and Tillis is busy running for the US Senate.  He’s been avoiding public forums during the GOP primary, but has been quite visible on Facebook.  Tillis regularly engages voters in state government policy discussions in that forum.  So, Revels took to Facebook to try and get Tillis to comment on the report from the CCA-NC newsletter featured in her documentary: 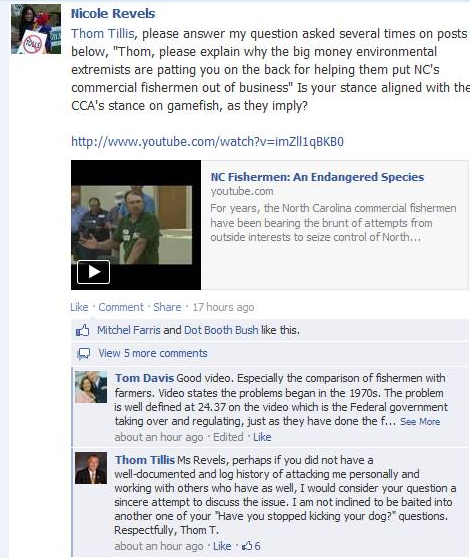 An interesting response from Speaker Thom — since I’ve seen prior occasions where he has engaged Ms. Revels and her friends in policy discussions via Facebook.

But Revels didn’t let that comment from Tillis go: