Jones Street Republicans got buried under an avalanche of negative press Wednesday over House Bill 2 — which invalidates recent ordinance changes approved by The City of Charlotte.  I swear — the NCGOP needs a halfway effective media operation.  (I thought former Fox reporter Dallas Woodhouse and the former WNCN anchor were going to fix the problem.)

We got all kinds of mealy-mouthed complaints from leftists about the wasting of time and money associated with the special session of the legislature. If these people were concerned about waste the other 364 days of the year — think of the possibilities.

The North Carolina constitution gives the legislature the last say on actions by city councils and county boards.  It’s a great check-and-balance. Liberals would howl if some city council in — say — southeastern North Carolina voted to reinstate “Jim Crow” laws. I don’t think we’d hear all of this caterwauling about the sanctity of local authority.

There has been some really outrageous stuff being circulated about the legislation that passed Jones Street last night.  I decided to look at the bill itself — and share my two cents with you:

[…] Single-Sex Multiple Occupancy Bathroom and Changing Facilities. – Local boards of education shall require every multiple occupancy bathroom or changing facility that is designated for student use to be designated for and used only by students based on their biological sex.

(c) Accommodations Permitted. – Nothing in this section shall prohibit local boards of education from providing accommodations such as single occupancy bathroom or changing facilities or controlled use of faculty facilities upon a request due to special circumstances, but in no event shall that accommodation result in the local boards of education allowing a student to use a multiple occupancy bathroom or changing facility designated under subsection (b) of this section for a sex other than the student’s biological sex.

(d) Exceptions. – This section does not apply to persons entering a multiple occupancy bathroom or changing facility designated for use by the opposite sex: (1) For custodial purposes. (2) For maintenance or inspection purposes. (3) To render medical assistance. (4) To accompany a student needing assistance when the assisting individual is an employee or authorized volunteer of the local board of education or the student’s parent or authorized caregiver. (5) To receive assistance in using the facility. (6) To accompany a person other than a student needing assistance. (7) That has been temporarily designated for use by that person’s biological

It’s sad that our society has reached the point where we have to clarify someone’s sex / gender as “biological.”   For the record, in this legislation, your biological sex is what your birth certificate says it is.

So far, we’re pretty reasonable.  If you have a male student that likes to dress as a female, it could likely cause some heartburn / controversy / violence in the boy’s locker room. Things would be somewhat uncomfortable in the girl’s locker room.  An exception for single-occupancy bathrooms or changing rooms is a good middle-ground. We’re not trying to alter the laws of nature via bureaucratic fiat.

The bill also deals with “consistency” in employment and contracting laws across the state.  In other words, Chapel Hill can’t demand that all contractors have, as full-time employees, five trannies and at least one Bernie Sanders donor in order to bid on town work.  Again, we’re being pretty reasonable here.  MORE: 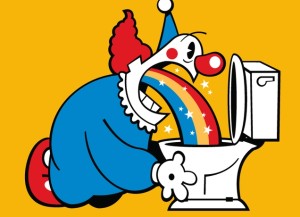 […] It is the public policy of this State to protect and safeguard the right and opportunity of all persons to seek, obtain and hold employment without discrimination or abridgement on account of race, religion, color, national origin, age, biological sex or handicap by employers which regularly employ 15 or more employees. (b) It is recognized that the practice of denying employment opportunity and discriminating in the terms of employment foments domestic strife and unrest, deprives the State of the fullest utilization of its capacities for advancement and development, and substantially and adversely affects the interests of employees, employers, and the public in general. (c) The General Assembly declares that the regulation of discriminatory practices in employment is properly an issue of general, statewide concern, such that this Article and other applicable provisions of the General Statutes supersede and preempt any ordinance, regulation, resolution, or policy adopted or imposed by a unit of local government or other political subdivision of the State that regulates or imposes any requirement upon an employer pertaining to the regulation of discriminatory practices in employment, except such regulations applicable to personnel employed by that body that are not otherwise in conflict with State law.” […]

In other words, the General Statutes are sufficient for protecting people’s rights across the state.  Asheville, Charlotte, and Carrboro don’t need to pimp their local employment and contracting rules.

As you can see, this is about a lot more than potties.

This is actually a freedom-granting action.  For Charlotte business owners, politicians they can’t vote for or against can’t browbeat them into buying into the homosexual political agenda.  If you want to make accommodations in your place of business to be more gay, lesbian or tranny friendly — you can knock yourself out.

This is hardly the return of “Jim Crow” or The Third Reich or apartheid.  It’s a bit of defense against an onslaught by a very aggressive, very vocal political minority. They will likely find some Obama or Clinton appointed judge to overturn this thing and give Charlotte back their ordinance.  But at least we stood and fought.