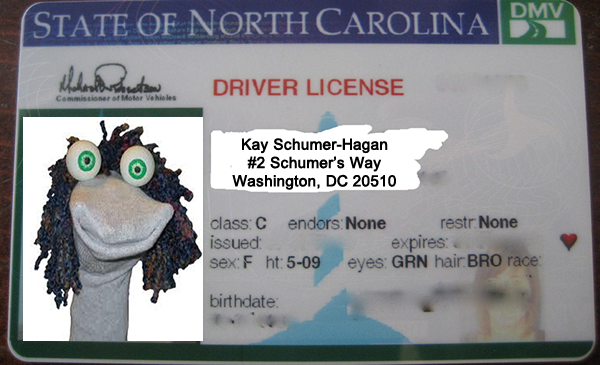 Gov. Pat McCrory took our advice and signed that voter ID bill passed by the General Assembly.  Kudos to him.  The bill didn’t go as far as I would like to see it go, but something is better than nothing.

Of course, the leftists went nuts. Bill Barber roared and stampeded down the Halifax Mall.  US Senator Kay Hagan — affectionately known in many parts as Chuck Schumer’s sock puppet™ —  has asked Barry Obama’s perjuring, race-baiting attorney general to investigate our state AND this new law.  I can’t think of the last time a sitting US senator sicced the US Department of Justice on his / her own constituents.

I can see how an ID requirement for voting would upset ol’ Kay.  It would certainly throw a monkeywrench in her plans to repeat the street-money-fueled shenanigans that fueled her run past Elizabeth Dole in 2008.

It’s no surprise that The Sock Puppet is invoking imagery of The Klan, dogs and firehoses, MLK, and Rosa Parks in this piece of cheap political theater.  She can’t run on her record. Her polling is in the toilet.  (Even Heather Grant could knock her off in the general election.)  Just like with John Edwards — six years has been enough for us.

Are these lefties seriously going to argue in court that their followers are not smart enough to figure out how to obtain absolute proof of their identities?  HOW do you function in life without ANY method for proving who you are?

The rights to vote and to bear arms are both spelled out in The Constitution.  We’ve got all kinds of rules and regulations — including background checks and IDs — for gun purchases and ownership.  What’s the problem with requiring an ID to prove that you actually DO live in that voting precinct, and ARE a lawfully registered voter?  Answer: Not a thing.

3 thoughts on “ID for voting, enforcing immigration is BAD. ID for buying guns, beer is GOOD. So sayeth The Sock Puppet.”