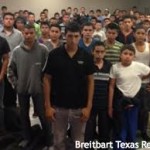 We posted earlier about the secretive effort by the feds to dump all of those border-crashing kids from South America in various US states — without bothering to inform the governors or other leaders.

As of July 31, the feds report that 1429 illegals have been relocated to North Carolina.  The feds also offer a county-by-county breakdown of where those illegals went.  (Only those counties receiving 50 or more illegals were listed.)  Durham got 157, while Wake got 170, and Mecklenburg got 488.  And THIS info is already ONE MONTH old.

South Carolina got a total of 434 of those little darlings.  Greenville County got 106, while Beaufort County got 56.

We’ve heard North Carolina governor Pat McCrory expressing his outrage over the tactic.  No notification was given to state government about the locations or identities of these

individuals.  It is also not known if any health screenings were performed on the little darlings before they were transferred in.  Nikki Haley of South Carolina has also voiced her concerns.   As far as other congressional or state government leaders go — we’ve heard crickets.

It would be interesting to hear Renee Ellmers’s take on all of this — since she is a major proponent of amnesty for illegal aliens and at least one of the counties in her congressional district has received more than its fair share of these border crashing little darlings.

We’ve also got a lil’ ol’ US Senate race going on in North Carolina. (South Carolina has TWO.)  It would be great to get some kind of reaction from the candidates involved in those campaigns. We need SOMEBODY to stand up to this.

2 thoughts on “How many illegal aliens did Barry dump in your county?”