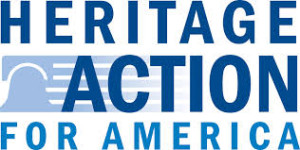 Heritage Action has updated their conservatism rankings for the current session of Congress.  There HAS been some shakeup in the North Carolina delegation.  For the current 113th Congress (2013-2014) , Reps. Mark Meadows, George Holding and Robert Pittenger appear to be racking up the most conservative voting records in the delegation. Contrast that with the 112th (2011-2012), where Virginia Foxx, Patrick McHenry and Richard Burr were at the top of the rankings. (Foxx and McHenry are moving up in the leadership ranks in the House — so that probably explains the falling conservative rankings.)

In South Carolina, Reps. Jeff Duncan andTrey Gowdy and Senator Tim Scott are leading the pack in Heritage’s conservatism rankings.  (Duncan was #2, behind only then-Senator Jim DeMint, in the 112th Congress rankings.)

back to the Tar Heel State.  In the 112th Congress, Heritage rated Renee Ellmers as the most liberal Republican (58%) in the North Carolina delegation.  In the current session, Ellmers drops to a 54% rating, but hands off the most liberal position to retiring Rep. Howard Coble.

In the Senate, North Carolina’s Richard Burr sits near the bottom of the state’s GOP caucus with a 58 percent rating.  Democrat Kay Hagan comes in with a 4 percent ranking — confirming her position as the most liberal member of the state’s congressional delegation.

In South Carolina, Republican Tim Scott earns a ranking of 88 percent, while Lindsey Graham pulls a 51 percent ranking — making him more liberal than everybody in the state’s delegation except Rep. Jim Clyburn.