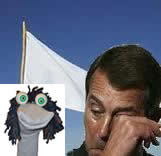 […] Hagan bemoaned the way Congress waits for deadlines to act. She said Speaker of the House John Boehner needs to, essentially, write off the 64 Tea-Party-style Republicans who are blocking compromise measures in the House and move legislation that other Republicans can pass with support from House Democrats.[…]

Hmm.  Not ONE WORD from Chuck Schumer’s Sock Puppet™ about working with Mitch McConnell to break the logjam in the Senate perpetrated by “Dingy Harry” Reid and her puppetmaster.

That’s got to make Republicans feel *GOOD* to hear one of the most liberal members of the U.S. Senate offering words of encouragement to the Republican House leadership.

John Boehner and the rest of the House leadership are apparently foregoing the defunding of ObamaCare in the continuing resolution, and instead aiming for tying an increase of the debt ceiling to some unnamed, unspecified trimming to ObamaCare’s implementation.

It appears that quite a few North Carolina Republicans in DC are taking Hagan’s advice to dump that pesky Tea Party and work with John Boehner.  Renee Ellmers, Patrick McHenry and Virginia Foxx in the House are teaming with Richard Burr in the Senate to poo-poo the whole idea of using the continuing resolution to defund ObamaCare implementation.  Howard Coble, George Holding, Richard Hudson, Mark Meadows and Walter Jones have signed on to the effort to tie ObamaCare defunding to the passage of a continuing resolution.

The Tea Party Express — one of the largest Tea Party-affiliated political committees —  pulled in to North Carolina today to lobby the North Carolina delegation to sign on to the defunding effort.  Out west, the Tea Party leaders praised Rep. Meadows while criticizing Renee Ellmers.   In Raleigh, the group held a press conference featuring criticism of Senator Burr and a speech from  GOP US Senate candidate Greg Brannon.