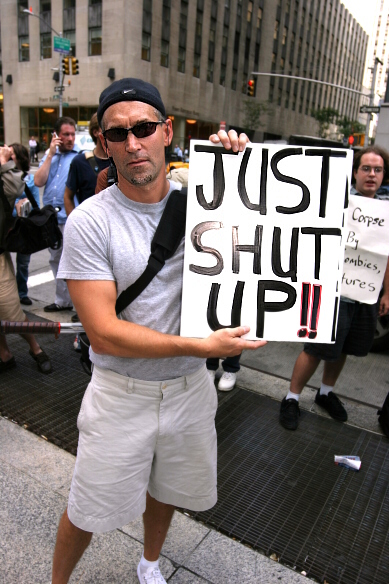 Fifty years ago, The University of North Carolina passed a Speaker Ban to clamp down on Marxist interlopers trying to poison the young skulls of mush matriculating in Chapel Hill.  Of course, the lefties went nuts.  Universities are about the sharing of ideas.  Exposing people to all points of view, they said.

In 1968, the ban was overturned by the courts.  The leftists rejoiced — hailing a new era of free speech and openness in the heart of Orange County.

Fast forward to the present day.  In 2009, the university gained statewide and national publicity due to leftist fascists disrupting and shutting down on-campus speeches by conservatives Tom Tancredo and Virgil Goode. In 2013, student government at Carolina has cut the College Republicans’ speakers budget by 75 percent.  The Foundation for Individual Rights in Education is actively expressing concerns about the level of respect for The First Amendment at UNC-Chapel Hill.  I guess those arguments from the 60s about hearing all kinds of points-of-view are no longer relevant.

I am an adjunct professor at two different college campuses here in North Carolina.  I consider myself a libertarian-leaning conservative. But I do not attempt to brainwash students.  I encourage debate. I expose my students to Ayn Rand, Peter Drucker and Milton Friedman.  We discuss and debate the points in their works. I also offer in-depth explanations of the socialist and Marxist views on economics.   I don’t fail people for disagreeing with me.

One of my favorite professors during my undergrad years was a guy who admitted to the class he was a socialist.  He and I had spirited debates about US foreign and domestic policies in class.  He was respectful to me, and I was respectful to him.  I think we both learned a lot by the end of the semester.  (I got an ‘A’.)

I try to live by some advice the late Tim Russert offered up about 20 years ago. I was working in DC, and was part of a small breakfast group that met monthly at The Jefferson Hotel. We regularly had media figures like Brit Hume, Sam Donaldson, George Will and Tim Russert join us for off-the-record discussions.  Russert, then somewhat of a rookie with NBC news, was open about his Democrat background.  But he told us something interesting about how he prepares for his on-air work.  He talked about reading The Nation AND The National Review.  He talked about reading The New York Times AND The Washington Times.  Russert talked about how important it is to expose yourself to the work of folks you disagree with — as well as to the work of those you agree with.  It makes you a much better-informed, more well-rounded person when you have a good understanding of the folks on the other side.

Mike Adams — the token conservative on the faculty at UNCW — recently made national news with an open letter he wrote to a liberal colleague who had slandered him for daring to express an opinion outside of the leftist orthodoxy.  That lefty faculty member called Adams “the biggest embarassment to higher education in America.”  Adams responded by pointing out several wacky, bizarre events perpetrated by leftists on North Carolina campuses in recent years and asking which was more embarassing — Adams’ comments or the antics of those leftists.

The media and the Democrats have lamented the rise of an alleged conservative revolution in North Carolina.  Granted, the GOP has taken control of state government.  But the left is firmly in control of higher education in North Carolina.  We’ve got radical far-left misfits firmly ensconced in tenured roles —  soaking up tax dollars to stoke white guilt, trash religion and bash capitalism. You have to look hard through the course catalogs to find courses that would be meaningful to young people setting out into the world with their diplomas seeking gainful employment.

The Republicans in Raleigh have a grand opportunity to reform The University of North Carolina system. I’m not suggesting turning the campuses into GOP training camps.  How about actually pushing them into the position of (1) encouraging free thought and debate, and (2) providing more meaningful curriculum elements to aid students in the post-graduation world?  A lot less African history, poverty studies,  and feminist literature, and a whole lot more management, economics, marketing, entrepreneurship, American history and government.  What kind of job can a load of feminist lit classes land you?

The Board of Governors and the various boards of trustees have a significant amount of influence in shaping the hiring and operational policies on campus. NCGA leaders could seek out people seriously committed to making fundamental lasting changes on the UNC campuses.  But so far, we’ve seen an awful lot of rewarding of campaign contributors.

If you want a serious conservative revolution resulting in fundamental, long-lasting change — reforming UNC from the top down is a great place to focus your attention.

2 thoughts on “The Carolina Way: Speech is Free (only for leftists)”