It’s graduation season.  Public and private schools across the country are turning out freshly-indoctrinated young people into the workforce.  I had the chance to encounter one of these young people at a social gathering over the holiday weekend.

I was chatting up an old friend of mine that I hadn’t seen in a while.  He and his family had defected from The Soviet Union 32 years ago — when he was in his early teens.  My friend brought up all of Putin’s latest hijinks — particularly in The Ukraine — and drew comparisons to Stalin.  A young man — a product of North Carolina public schools and fresh out of  UNC — overheard our conversation and joined in.

What was so bad about Stalin?, the young man asked.  Didn’t he help us in World War II? (This kid had seen some of those famous pics of Churchill, FDR and Stalin at Yalta.)

I thought my old friend was going to have an aneurysm in reaction to this.  He and I brought up Stalin’s passion for murder and gulags, for starters.  The young skull of mush had to ask: What’s a gulag?

The kid had NO idea that Stalin and Hitler were a team until Hitler double-crossed Stalin.  He also had no idea that Soviets and German Nazis had basically the same beliefs.

For kids of that generation, most of their history knowledge comes from movies and the TV.  You see a lot of stuff about how bad the Nazis were.  When was the last time you saw something out of Hollywood depicting the horrors of Soviet communism?

The author George Santayana once wrote: Those who fail to learn from the past are doomed to repeat it. Our students are apparently not learning much about the past.  What they do pick up tends to have a far-left slant modeled on the conventional wisdom in college education departments across the country.

This got me thinking about the struggle to have Common Core standards thrown out of our public schools here in North Carolina. Gov Pat McCrory and his team think Common Core is a good idea.  Quite a few members of the state House Republican leadership seem to be favoring the retention of the standards. House Speaker Thom Tillis has been tap-dancing around the issue as he seeks a US Senate seat.  Yet, he is strongly backed by Common Core’s top cheerleader — The US Chamber of Commerce.

I’ve received disturbing reports out of Raleigh that the plan is to DO NOTHING about Common Core during the short session — in order to avoid negative publicity and protect someone’s Senate bid.

Check out THIS example from a history quiz in Buncombe County.   On the linked document, Question 7 downplays Gregory Johnson’s affiliation with the Communist Youth League and the fact he was busted for rioting, vandalizing a building and burning an American flag.  Question 8 touts the “fact” that The Constitution is a “living document.” In other words, it SAYS whatever we want it to say to fit the contemporary climate.  You know — the whole “right to choose abortion” and the “freedom of expression” things. 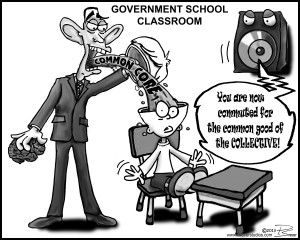 Check out this video of one of the authors of the Common Core history curriculum — where he says his work was influenced by his desire to end “white privilege.”  (Irony Alert:  According to the linked article, the school that employs this guy finds the Common Core standards “inferior” and does not use them.)

This article details how the authors of Common Core find the beginning of The Constitution’s preamble — We The People — exclusionary, sexist and racist because of, you know, slavery and the lack of women’s suffrage at the time it was written. It wasn’t really talking about ALL of the people, they argue.  These leftists are here, apparently, to “fix” that centuries-old outrage.

It gets *better.*  This article ranks the author’s picks for “The Ten Dumbest Common Core Math Problems.”  Apparently, rulers are so passé. The “new” thing is to measure stuff by the length of your crayon.  (Oh, and don’t get us started on “number bonds.”)

The author of the linked article includes screenshots from a “cheat sheet” sent to some Atlanta-area parents so they can attempt to understand this bureaucratic gobbledy-gook for themselves. *How Nice.*

3 thoughts on “Edu-crats keep pumping out skulls-of-mush. Woe unto our state and nation.”