Once again, Congress has kicked their budgeting and fiscal management duties down the road.  The House passed another continuing resolution — keeping the government funded fully through December 9 — to avoid the much-feared government shutdown.

From the North Carolina US House delegation, the only NO votes were Mark Meadows, Mark Walker, Walter Jones, George Holding and Renee Ellmers.  Everybody else was a YES.  The final margin? 342-85 in a GOP majority House.

Over in the Senate, the CR passed 77-21.  (THAT is also in a GOP majority chamber.)   North Carolina’s Burr and Tillis both voted YES.   Interestingly, both Graham and Scott of South Carolina voted NO.

Here’s Heritage’s take on the bill:

[…] The Continuing Appropriations and Military Construction, Veterans Affairs, and Related Agencies Appropriations Act, 2017, and Zika Response and Preparedness Act falls far short of conservative expectations. Throughout the summer and into the fall, conservatives said Congress should ensure the length of any continuing resolution did not require a post-election session of Congress. And throughout the appropriations process, Heritage Action evaluated each individual appropriations measure on the following three criteria: 1) level of spending; 2) funding of bad programs; and 3) exclusion of conservative policy riders. Heritage Action also uses these criteria to evaluate any continuing resolution, as well as factoring in a fourth, additional, and critical criteria: length of time.

Worse?  Really?  With a majority of members from the alleged conservative party ???    MORE:

[…] A recent report from The Heritage Foundation outlines the history of lame duck sessions:

“In recent years, Members of Congress have planned on taking up controversial issues during lame-duck sessions in order to avoid explaining their votes to the electorate. Congress now increasingly relies on lame-duck sessions to conduct its regular work. This practice undermines the ability of the American people to hold their representatives accountable because it allows Members to deliberately postpone unpopular decisions until after their constituents cast their votes.”

Level of Spending. The vast majority of Republicans rejected the Bipartisan Budget Act of 2015, a budget-cap-breaking deal negotiated by Speaker Boehner and President Obama that raised the debt ceiling with no offsets and broke the spending caps established by the Budget Control Act of 2011, despite the fact our country is facing a debt crisis of almost $20 trillion. Conservatives rightly rejected that approach and argued for passing a more responsible budget at the beginning of 2016, claiming that Congress should abide by the previous budget caps, and enact a budget at the lower $1.040 trillion level, instead of the $1.070 trillion as set by the budget deal.

Despite conservative objections, both chambers moved forward with appropriations bills marked to the higher number.  Even though none of those inflated appropriations bills became law, both chambers now want to move a continuing resolution spends at the higher budget numbers, and which will add to the debt and deficit.  H.R. 5325 contains four main fiscal components:

This higher spending makes it more likely the caps will be broken in the next fiscal year, as The Heritage Foundation explained earlier this year:

“Worst of all, by caving to higher spending levels for 2017, breaking the budget caps again in fiscal year 2018—which are set to $16 billion below current levels—almost becomes a foregone conclusion for the big spenders in Congress. This sets up the next Congress to go back on its promise to rein in spending once again, erasing the one modicum of fiscal restraint imposed on spending during the Obama administration.”

Funding of Bad Programs. A highly contested part of the Zika funding battle was whether or not Planned Parenthood, and particularly its affiliate in Puerto Rico, Profamilias, would have access to the additional funds. Planned Parenthood Federation of America (PPFA) opposed the language contained in the House passed conference report of the MilCon/VA/Zika bill earlier this year, because it was difficult, but not impossible, for Profamilias to access the Zika reimbursement funds. However, the Senate CR language eases Planned Parenthood’s concerns.

The Senate language replaces the House funding and restrictions with two new funding streams of $75 million and $20 million, but without explicit restrictions on who would be eligible for these funds. Specifically, the Senate version dropped the Medicaid requirement and makes the grants discretionary by allowing for “reimbursements” of Zika related health care expenses. This means that no one would be guaranteed money, but Profamilias would now be eligible. 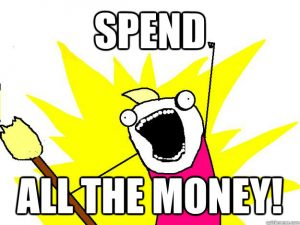 According to Roger Severino, Director of the DeVos Center for Religion and Civil Society:

“As if reauthorizing millions upon millions in taxpayer dollars to the nation’s largest abortion provider weren’t bad enough, Planned Parenthood has strong-armed Congress into also getting a cut of emergency funding for combating the Zika virus.

“Under the continuing resolution, Planned Parenthood will be eligible for a raise even though it should have been disqualified from taxpayer funding long ago because of its callous treatment of human life.  Congress should fund life-affirming health care providers that are ready to deal with the Zika threat comprehensively, not abortion providers trying to expand their profit base.

“It’s shameful that Planned Parenthood and its congressional allies were able to hold emergency health funding hostage until ‘Big Abortion’ got a cut of the new money. Congress should fund compassionate and life-giving care with taxpayer funds, not an abortion industry that has disqualified itself by placing profits over respect for human life.”

Exclusion of Conservative Policy Riders. While Heritage Action cautioned that exchanging temporary conservative policy riders in exchange for a lame duck session will give President Obama and unaccountable lawmakers one more chance to pass permanent policies in the dead of night, some conservatives outlined a series of policy riders that should included in any continuing resolution regardless of length:

None of these riders were included in the current version of the Senate bill.

Again, HOW is this better than having the Democrats in charge?

14 thoughts on “Another day, another spending bill (*SIGH*)”