Yep.  You read that right. 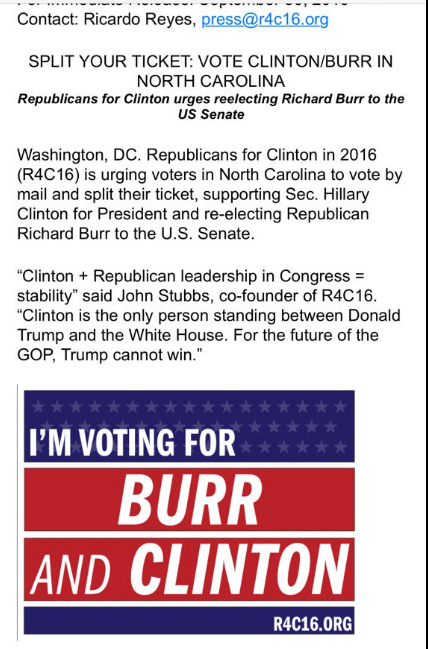 *Stability.*  That’s code for keeping things AS-IS for the clique running the place.

I looked into this crowd, and they are for real.  For the most part, it looks like a lot of disgruntled Romney, McCain and Bush cronies.  *You know, all of those people we conservatives were told to suck it up and get behind no matter what.*

(By the way, Burr’s consultant was musing not too long ago about this very same ticket-splitting scenario.)

Some of the folks involved here are surprising and a little disappointing — like Charles Fried and Ken Adelman.  They were both good soldiers during the Reagan Administration.  But, they’ve STAYED in Washington and have become creatures of that town.

Burr and Clinton.  If you consider (1) the aiding and abetting of DC’s budget-busting, tax-and-spend ways, (2) the enabling of the introduction and expansion of ObamaCare, (3) the support for leftist federal judges, and (4) The Clinton Foundation and Burr’s lobbyist brother-in-law, and (5) the unrelenting attacks on our privacy from government snooping, there REALLY is not a lot of difference between Tricky Dick and President Pneumonia.  They’re a match made in HELL.