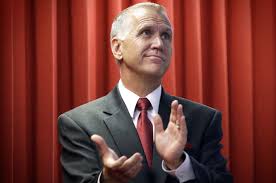 Over at the conservative web site Ace of Spades HQ, we’ve got some more eye-opening analysis on the Senate race:

[…] Senator Hagan’s thin lead suggests a close race, much like what we saw in Alaska, Colorado, and Iowa, but unlike her collegues there, she has managed to stay ahead. After a dramatic drop over the course of numerous surveys through 2013 into early 2014, she has recovered a small but consistent lead over Thom Tillis, who is watching his disapproval ratings climb whilst being pummeled by Hagan’s ads. Fans of Professor McDonald’s fantastic election website have been able to enjoy early return statistics, and while it is early, they seem to reiterate the tough task ahead of him: the first batch is older and whiter, but also very Democratic for this early on. A pasty electorate is no help to him: contributor Brandon Allen outlined a big problem Tillis is facing among white voters in this electorally segregated state earlier today:

As you can see, not even Elizabeth Dole, who lost her seat in 2008 by an 8-pt margin, did as poorly with white voters as Tillis is doing now. She carried them by 18-pts. Even more stark, Mitt Romney won 2.5 times more North Carolina whites than Tillis has averaged in polls since August – and remember, Romney only carried the state overall by two points!

Why? He can’t blame his current situation on being out-banked: Udall and Braley have had more cash at their disposal, and both trail their Republican opponents. He can’t blame disunity within his own party, either: Mitch McConnell is viewed with distrust by a lot of conservatives, yet he is now the clear favorite in Kentucky. We feel his inability to shift the narrative to Washington and away from North Carolina, where he has been under a magnifying glass with the rest of the legislature, has been his biggest problem. The candidates that have effectively made their opponents into creatures of DC or co-signers on a weak Administration have found small leads (Ernst, Gardner) or narrowed the pathway against a popular incumbent (Brown). Those that have botched whatever footing they did have, and allowed the Democrat to define them, stalled and sank.[…]

Amen. We’re going back and forth on the state education budget as opposed to getting down and dirty about the disastrous impact Washington has had on our economy, our country, and our culture.