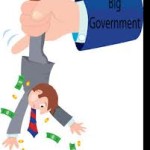 We’re getting a lot of propaganda about the importance of beating Democrats this year.  But HOW do you sell that idea when you have some Republicans who are as into statism as the Democrats are?

Gov. Pat McCrory appeared to  be floating a trial balloon the other day about new methods for financing road construction.  We’ve got one of the highest gas taxes in the country which is supposed to be paying for all of our road needs.  Now, we’re hearing that Gov. Pat’s Department of Transportation  board is seriously mulling some new methods for getting into our wallets:

A state Board of Transportation committee this week will receive a recommendation that North Carolina test-drive an approach that seems both daunting and inevitable: Start taxing drivers by the mile instead of by the gallon.

The idea of a mileage fee is simple. But the execution is complicated, and the politics are dicey.

At least 10 other states have considered mileage fees. A few hundred Triangle area drivers took part in a national study done by the University of Iowa several years ago, with GPS technology installed in their cars to count the miles as they traveled in each state and each local jurisdiction.

In theory, with such a system in place, one day you might pay X cents a mile to the federal government for the 100 miles you added to the odometer last week – plus state taxes at different rates for the 80-mile share that took place in North Carolina and the 20 miles in Virginia. Meanwhile, Raleigh might claim a piece of the action, too, because you spent 50 of those miles on city streets.

Yeah.  The state starts doing it.  Then, your county and your city hop on the bandwagon.  Then, the folks in DC will latch on. By that point, you’ll have so many “parasites” attached to your car you’ll go broke driving to work each day. Give an inch, and government will take a mile.

That sounds fair. And it sounds creepy. If the tax collectors know where we’ve been driving, who else knows?

“Our participants, even though they saw the mileage charge being a fair and equitable move, they were concerned about privacy and what’s going to happen to that data,” said Paul Hanley of the University of Iowa Public Policy Center, who directed the Road User Charge Study.

If you love the idea of the NSA monitoring cell phone calls, you’ll be ecstatic over this.

[…] Ever since the state collected its first penny per gallon in 1921, the fuel tax has resembled a user fee: The more you drove, the more you paid. The more gas we burned, the more money we had for road-building and other transportation needs.

But this is changing fast as our cars squeeze more and more miles out of every gallon. And in 2012 with support from automakers, the Obama administration announced aggressive new rules that will push the average fuel-economy standard even higher, to 54.5 miles per gallon in 2025.

This trend is good for plenty of reasons but not for North Carolina’s ability to fix bridges and widen freeways. We rely more heavily on the gas tax and less on other sources than most states do.

The state Department of Transportation figures that gas and diesel fuel consumption will decline only a little in coming years – falling from a peak of 5.6 billion gallons in 2007 to 5.1 billion gallons in 2025. But during that same period, the state population is expected to swell from 9 million to 11.1 million people – almost enough to offset the improvement in fuel economy.

As transportation costs rise, DOT expects revenue collections to fall about $1.7 billion short of what we’ll need over the next decade.

Again, we have one of the highest gas taxes in the country.  Our gas tax rate per gallon is roughly equivalent to SC and VA’s added together.

Also, it’s been proven at the federal level that — when tax rates go down — revenue GOES UP.  Could we perhaps see the same phenomenon with a dramatic reduction in the state gas tax rate? The outrageous price of gas within our state’s borders these days has people limiting their driving.  (It’s also driving up the cost of goods and services offered for sale within The Tar Heel State.)

Also, how does this spin mesh with what we’ve heard about new residents flooding into the state?  More people moving into our state means more people driving the roads and buying gas.

Other states are coming up with their own ideas. Virginia has decided to collect a big share of its transportation money from new sales taxes. Pennsylvania’s solution will effectively raise the state gas tax by about 27 cents a gallon over the next three years.

North Carolina leaders aren’t crazy about increasing a gas tax that already is among the highest in the nation.

“So far as I can see, there’s not a lot of political appetite for changing a tax rate that people are reminded, every time they fill up, that they’re paying,” said Nick Tennyson, DOT’s chief deputy secretary.

How about redirecting some money from existing state spending?  The state GOP has been crowing about

the cuts in the state budget passed by the GOP-dominated legislature.  But THAT’s just the general fund.  The John Locke Foundation — hardly a leftist bunch — found that state spending OUTSIDE the general fund has exploded in recent years.  These guys on Jones Street need to tighten their belts and do some sacrificing FIRST, before asking us to do more.

[…] “We always thought we had a few more years, and now I don’t think we feel that way any more,” said Cheryl McQueary of Greensboro, a retired U.S. DOT official and private sector executive appointed by Gov. Pat McCrory to the Board of Transportation. “We need to find some alternative revenues, such as tolling – or we need to deal with existing options for revenue, like the gas tax, like vehicle registration fees.”

McQueary chairs a board committee charged with finding answers and making recommendations. On Wednesday, her panel will hear “revenue enhancement” proposals from Larry Goode, a former state highway administrator, and Leigh Lane of the N.C. State University Institute for Transportation Research and Education. […]

Among the big-dollar options: Add a percentage point to the highway use tax on car sales, which is lower in North Carolina than in neighboring states, to generate another $170 million a year. Halt the transfer of $255 million a year from the Highway Fund to the state’s General Fund.

One likely prospect is congestion pricing, already used in several states and planned for an Interstate 77 project in Charlotte. It would employ North Carolina’s electronic toll collection technology to set variable rates for travel in special freeway lanes for drivers willing to pay higher tolls when the other lanes are more heavily clogged.

Yeah.  We already know about the Charlotte deal.

The Lane-Goode report suggests North Carolina could raise $495 million a year from a tax of one-half cent per mile on cars. This is a lot lower than the mileage tax suggested in DOT’s 2040 plan, 2 cents a mile.

Whatever the rate, Lane and Goode recommend that DOT launch a pilot program to test a system for collecting mileage fees. They mention a 1-cent fee for trucks, but other studies have suggested higher rates.

Rather than get tangled in Iowa’s GPS technology, North Carolina might test the water with something simpler, like an odometer reading every year when we get our cars inspected. That would be easier to administer, but it wouldn’t give car owners credit for those miles they drove in Virginia last week. It’s not clear what Lane and Goode will suggest.

“Mileage fees are attractive until people start to struggle with exactly how they would want to implement them,” Tennyson said. “The issues get down to things like if you want to have the most accurate system, then the vehicle has to report where it’s been and at what hours of the day or night, and people don’t want to do that.”[…]

Baskin-Robbins has 31 flavors of ice cream.  In American politics, it’s looking more and more like we have TWO flavors of statism.

4 thoughts on “Tholl Roads. Thaxation-by-GPS. Brought to you by a Republican administration.”