In DC, when they talk these days about the Dynamic Duo, they’re not referring to Barry & Joe, or The Donald & Newt.  It’s all about Thom & Cory.
No, we’re not talking about the hottest new sitcom on the LOGO network.  We’re talking about the two BFFs aiming to take control of the National Republican Senatorial Committee:

Sens. Thom Tillis of North Carolina and Cory Gardner of Colorado are floating a novel idea: Sharing the job of leading the Senate GOP’s campaign arm.

The freshmen lawmakers are gauging support for a proposal to become co-chairmen of the National Republican Senatorial Committee for the 2018 election cycle, a prime opportunity for the GOP to pick up seats or recapture the Senate if they lose it this year. Democrats will be defending 25 seats vs. just eight for the GOP, and Tillis and Gardner are aggressively pursuing a leadership role at the organization to capitalize on the opportunity.

Two guys running as a team for a job that has always been done by ONE?  Lloyd and Harry couldn’t have come up with a better game plan.  MORE:

[…] Though both won Senate races in 2014 in purple states, each has a different specialty that could help make such an unusual arrangement work. Gardner has a sunny disposition and has refused to endorse Trump given the diverse population and libertarian bent of his state. Tillis is a former statehouse speaker and has become one of Trump’s most vocal surrogates in recent weeks.[…]

Really?  I don’t think I have heard anything out of Thilli$$$ about the presidential race since his *well-timed* endorsement of Marco Rubio DAYS before Rubio quit the race.  (Hmmm.  I don’t think Thilli$$$ even bothered to show up for Trump’s recent rally in Raleigh.) 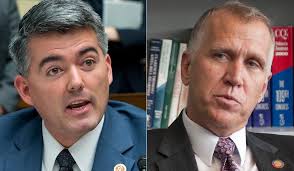 Donors and lobbyists have been informed of the co-chairmen idea, and Tillis confirmed in an interview that it’s under consideration. Nothing will be decided until after the 2016 election, when the GOP caucus will elect the next NRSC leadership team.

“It’s not any more prominent than other operational things that we’ve talked about that we may want to look at,” Tillis said of the proposal. “I’m an organizational guy. So it’s like, what do we think is optimal for running the 2018 cycle? But right now we’re laser focused on 2016.”[…]

[…] Convincing the caucus to elect a Gardner-Tillis tandem would allow the party to skirt an intra-party feud between close friends. But that’s not the point, Tillis said.

“I don’t think it’s about avoidance at all. What you have to do is look at what’s the optimal model at every level of the organization. I’m an organization change guy,” Tillis said. “It could very well be the traditional model makes sense. We could go down that path. Or some other model (might make) sense.”

Another possibility that some Republicans view as more realistic would be a power-sharing agreement similar to the 2014 leadership team. Sen. Jerry Moran of Kansas was chairman and was tasked with recruiting, media and organizational duties. One of his vice-chairmen, Sen. Rob Portman of Ohio, was the fundraising guru, traveling the country to rack up millions that proved invaluable in taking over the Senate.

Despite the success of that team and its pick-up of nine seats, the NRSC wasn’t entirely stable that cycle. The second vice-chair was Sen. Ted Cruz (R-Texas), who made a $250,000 donation to the NRSC, but essentially abandoned his job of facilitating grassroots outreach. Cruz believed the NRSC was getting too involved in Republican primaries.[…]

*Gee, what could go wrong here?*  It’s a whole new channel for shaking down people with interests before the government.  It sounds like a win-win for University of Maryland University College’s online bachelor’s degree program’s favorite son.  He’ll be in a position to shake down lobbyists AND heavily influence candidate recruiting.  (JUST like he did in the NC House — saddling us with a caucus full of RINOs.)

I seem to remember Elizabeth Dole landing the NRSC gig prior to her 2008 reelection bid.  (How did that work out for her?)