Nope, I am not talking about places in the vicinity of Rock Hill or Dillon.

I’m talking about the stampede of unaccompanied children across our border with Mexico.  Obama and the rest of the statists in DC are trying to describe it as a humanitarian crisis.  *We can’t just send all of these poor kids back across the border, can we?*

We are being sold the story that this was a surprise that caught everyone on our side of the border off-guard.  Well, a job posting from January has been uncovered.  The feds were, at the time, looking for “escorts” to transport 65,000 unaccompanied children from the US southern border.    Hmmm.  AT LEAST six months warning that this was going to happen.

It makes it a whole lot easier to call for amnesty when you’ve got an overwhelming flood of people coming across the border.  If you let the kids stay, you’ll HAVE to let the parents come in.

What’s even worse — it appears that the Obama regime is targeting conservative locales for relocation of these “refugees.”  That town in California where they blocked the buses is known as “The New Orange County.”  That community is now dominated by conservative 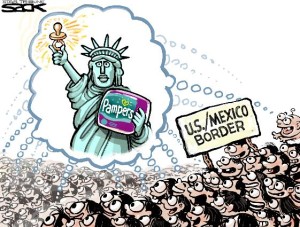 leaning voters who fled the insanity of the Los Angeles area.  Drop in a few thousand “refugees” — ever so grateful to Sr. Obama and Los Democrats — and given them the vote.  And you’ve succeeded in permanently transforming a “red” locale to a “blue” one.  Yep.  The regime is bringing all the *goodness* of Central American barrios to your neck of the woods.

Where are amnesty fans Renee Ellmers and Robert Pittenger on all of this?  WHO will help us halt this appalling attack on our national security?

California Gov. Jerry Brown is all for helping out the current relocation effort.  In 1975, during his previous tenure as governor,  Brown was not interested in taking in all of the Vietnamese refugees fleeing the violence in their homeland.  My, how times change.

6 thoughts on “The SCAM at our southern border”