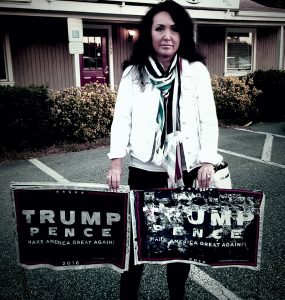 Supposedly, we on the right are the haters, the violent ones.  Yet, who does all the rioting and fighting in the streets?

Supposedly, we on the right are the ones who want to stifle free speech and independent thought.  The People’s Republic of Orange County — long hailed as a socialist oasis surrounded by all of this *dreadful* capitalism, freedom and happiness in North Carolina — prides itself as an example of “tolerance” and respect for all POVs.

Yet, an attempt at free expression by a tiny minority known as The Orange County GOP was met with a firebombing and threatening graffiti this weekend.

Local, state and federal authorities are all over the investigation.

This SURE doesn’t look like the tactics of a crowd that feels like they have an election in the bag.  It’s the act of cowards, of radicals, who apparently feel 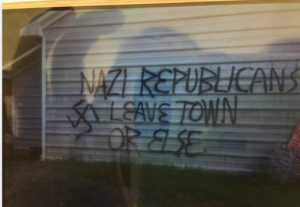 their agenda is being threatened.  This is the kind of third-world authoritarian crap practiced and praised by Obama heroes Fidel Castro and Hugo Chavez.

THIS is not America.