It’s interesting how — this close to the election — we’re getting news hard news stories detailing advertisements being run by partisan Democrat operatives.  The driveby stories are not critical, mind you, like they would be if they actually gave a damn about covering GOP or conservative ads.

Not long ago, Binky@WRAL decided to regurgitate a whole Roy Cooper ad from memory.  JUST IN CASE you missed it while it was running on his unwatchable TV station.

Now, Charlotte’s very own, quite somnambulant Jim Morrill has decided to give some extra play to a nasty ad attacking Pat McCrory running in his sister paper, The N&O.  According to Morrill, the ad is paid for by some people named Jill McCorkle, Lee Smith, and Ron Rash (sounds painful AND contagious) and a few others who claim to be authors.

(If THEY are authors, then I’m an author, too.  In fact, I am willing to bet I have more readers than those three I just named COMBINED.  Call me, Jim.  I’m ready to opine 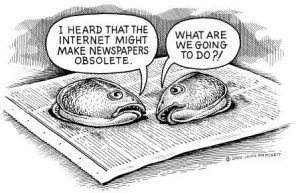 Hmmm. Turning to your own advertising department  to find your “stories.” Talk about groundbreaking LAZINESS.

(I am reminded of a story told to me by a certain Charlotte newsmaker about one particular visit he made to the Observer newsroom.  He said he bumped into Morrill, a longtime political writer, and told Morrill what a great job he would do COVERING SPORTS.)

I’ve yet to see ANY driveby tell the god’s-honest-truth about HB2.  McCrory did a great job explaining it in the debate the other night.  But the drive bys couldn’t be moved.  You see, THEY are not in the business of truth-telling this year.

2 thoughts on “NC DRIVE BY MEDIA: Liberal? Advertise with us. (Hardly anyone else will.) We’ll even do a story ON YOUR AD.”