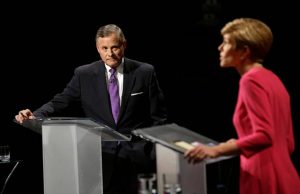 I thought last night’s Senate debate sounded very familiar.   Deborah Ross spouted all of Kay Hagan’s hard-line feminist and socialist talking points.  Richard Burr, just like Thom Tillis two years ago, threw up a lot of non-specifics peppered with a bunch of talk about “crossing the aisle” and “working with Democrats.” (And we see how, um, “well” that has all worked out, don’t we?)

I know Burr has the same consultant Tillis did. Ross apparently shares one with Roy Cooper.  She had that same glassy-eyed, hypnotized (or stoned) look and manner of speaking that her party’s gubernatorial nominee exhibited the other night.  (I was reminded of the hostages in those proof-of-life videos terrorists release to the drive by media.) Not at all impressive.  I’ve seen her in other venues, and she came off much more impressive in those than she did on TV last night.

As in 2014, we as Republicans / conservatives are hit with the “Vote Against X” argument.  Why, oh why, can’t 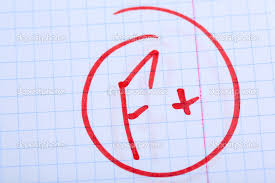 Ross makes it clear she will be a typical Senate Democrat — FOR nurturing ObamaCare, FOR raising taxes, FOR spending more.  She’s committing to her party platform.  Good for her.  If ONLY we could get Tricky Dick to commit to HIS.

Many conservative rating sites out there will cal you a conservative if you vote with your party’s leadership.  Conservative Review is one of the exceptions.  They stake out genuine limited government positions on the issues, and zap you if you stray from them.  According to Conservative Review, Richard Burr gets a grade of 39% (F) out of a possible 100.  That means that this year, Burr has only taken conservative positions 39% of the time.  Only Thom Tillis has a more liberal record than Burr does among North Carolina Republicans in Washington.

Here’s a sampling of Burr’s strays from the conservative line in 2016: 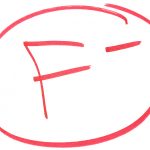 The Burr camp is spending a lot of time talking about how leftist and out-of-touch Ross is.  But at least she’s being truthful about what she is.  She’s not going home to tell people one thing and doing something else back on the floor.  The most conservative Democrat in the Senate earned a score of 12% from Conservative Review.  You can arguably estimate that Ross might earn an 8 or a 9.  So, if she wins, we will have traded a 39% (F+?) grade for a 9% (F-?) grade.  We fail either way.  We lose either way.

This might be a great choice to just leave blank on your ballot.