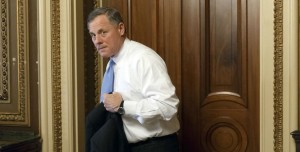 Gov. Pat McCrory, senator Phil Berger, and Lt. Gov. Dan Forest have been stand-up guys in defending their state and HB2 from the leftist howler monkeys.  What does our man in DC — Richard Burr — have to say about seven of his colleagues pressuring the NBA to boycott the Tar Heel State?:

[…] Further distancing himself from the rest of the GOP, Kirk has waded into issues that other Republicans aren’t too keen to get involved in. Asked about the attempt by Kirk and the Democrats to take the All-Star Game away from Charlotte, Sen. Richard Burr (R-N.C.) responded: “Oh, I’m not getting into that crap. Thanks.”

Gorbachev, tear down this wall.”   “Oh, I’m not getting into that crap. Thanks.”

The leftist hordes are slandering our state and attempting a shakedown Tony Soprano would be envious of, and our man in DC wants to stay out of it?  This ranks right there with describing the attempts to defund ObamaCare as “the dumbest idea” he’d ever heard of.

When it hits the fan, you can count on Richard Burr to duck and hide.

3 thoughts on “#ncsen: Tricky Dick ‘not getting into THAT crap.’”