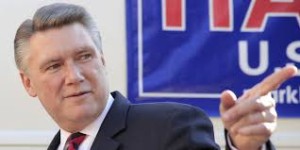 It appears that Charlotte pastor and US Senate candidate Mark Harris has learned what a lot of us have known for YEARS:  Thom Tillis is a political weathervane who will say anything or do anything to stock his campaign treasury and nail down some votes.  Even if it means taking credit for something he had little to nothing to do with.

One of Tillis’ neighbors in Cornelius emailed me once about this particular subject:

“[…] Thom is not interested in you unless you’ve got a bundle of cash in your hands. He’ll chase you down for a dollar.  I’ve often mused about taping a $20 bill to his front door every day just so he’ll stay the hell home.[…]”

The Harris campaign is speaking out on a commercial released by the Tillis campaign which appears to paint Tillis as the driving force behind the passage of the 2012 marriage amendment to the state constitution.

Here’s a statement from the Harris campaign:

[…]Tillis is quoted in the 30 second spot with, “…the thing I’ve never understood about politicians is the massive difference between what they say and what they do.”  Mark Harris agrees:

“If you are looking for a politician saying one thing and doing another, look no further than Mr. Tillis.  In his latest TV ad, Tillis points out the two faces of politicians while speaking about putting traditional marriage in the state constitution.  This is a perfect example of the massive difference between what Mr. Tillis is saying now to a conservative audience and what he did as an elected official with public statements predicting the marriage amendment would soon be overturned.”

Tillis’ prediction came shortly before the vote in May of 2012 and was widely seen as chopping the legs from underneath the marriage amendment leadership.  WRAL reported on the comments here.

While Tillis spends time campaigning on his work as a leader in passing the marriage amendment, conservative leaders know better. Mark Harris is the only candidate in the race that has received the endorsement of the National Organization for Marriage, a major financial and grassroots supporter of the 2012 movement in North Carolina.

Tillis’ wavering on the issue of traditional marriage has earned him a different type of endorsement from a hedge-fund CEO whom the Washington Post calls “the money man behind pro-gay marriage Republicans.”  North Carolina is now in the cross-hairs of several court challenges to its constitutional amendment which defines marriage as between one man and one woman.  While the amendment passed with 61% support, many conservatives are asking why Mr. Tillis has failed to take any steps to defend our state against the coming lawsuits.

“What type of conservative leader disingenuously flaunts his record on conservative values and then takes over $200,000 from a group that fights directly against those same principles?” said Harris.  “If Mr. Tillis does not recognize how such funding has strings attached, then how can North Carolinians trust him to represent our values when faced with the pressures from lobbyists and special interests in Washington, D.C.?[…]

Wow.  Tonight’s debate on UNC-TV might be kinda fun.

Many see stuff like this as Tillis trying to steal what he can in the primary in order to avoid a runoff — which he is guaranteed to lose.  He and his team have done so much to antagonize the Tea Party during the campaign.  Which supporters of which losing candidate will come over to Theam Thom to help their man escape a second primary?

11 thoughts on “#NCSEN: The Preacher Strikes Back”