Virginia Foxx was a conservative force in the NC  General Assembly.  She was elected to the US House to replace Richard Burr — who graduated to the US Senate.  Many had hoped Foxx would keep going with her conservative firebrand ways in Washington. 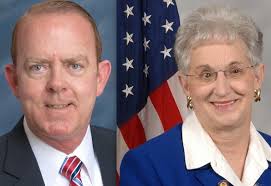 The GOP takeover of the House changed things, and Foxx began to “grow” in office.  Speaker Boehner named her to the powerful House Rules Committee, and she got elected to the position of secretary for the House Republican Conference.    The transition from conservative firebrand outsider to Establishment Insider was complete.

Last year, Texas senator Ted Cruz and North Carolina congressman Mark Meadows were leading an insurgent effort to defund ObamaCare.  How did Foxx come down on that fight?  Let’s see:

We had a meeting with Representative Virginia Foxx this past Tuesday. We already knew that she wasn’t on our side on the defunding Obamacare issue and we tried our best to prepare for the meeting, just as we had for our meetings with Hagan, Burr and Coble. Congresswoman Foxx was the most well versed in the anti-defund talking points. We felt that she and her aide were angry with us, the TEA Party and Ted Cruz.She and her aide stuck to their guns that defunding Obamacare just was not possible. At one point, her aide said, “Someone in the TEA Party sent out a notice that it was a gimmick and we were flooded with calls.”  She went on to say, “We just don’t have time to explain to people why it can’t be defunded, it would take fifteen minutes!” To which I asked, “Why not? Shouldn’t you be taking the time to explain it to folks, then they would understand and not be calling?” The Aide stated that if they explained it to everyone who called to ask, no one would ever get through because the lines would remain busy. My friend Debra said, “Isn’t that your job? To explain it to the people?”At one point, Representative Foxx stated, “Ted Cruz has brainwashed people.” We were shocked by this statement.She also said, “Mike Lee and Ted Cruz are deflecting attention away from the Senate because they simply cannot deliver,” in reference to defunding Obamacare. She explained that the proposed CR last week was not a gimmick. As she explained it and from the notes I have of the meeting, there were to be two bills. One for defunding Obamacare and a CR. The House would vote on both bills at the same time, but would only send over to the Senate the defunding bill. After being forced to vote on the defund bill, the House would release the CR.Her other arguments were that they cannot legislate in CR appropriations and the separation of authorizing bills and appropriations bills. Later, she reiterated this at the House session when she explained that they were voting on an authorization bill that night. After authorization, money must be appropriated.Throughout the entire meeting, they both maintained that the Congresswoman was opposed to Obamacare and wanted it repealed. She reminded us that they had voted to repeal it over 40 times in the House. I told her that our goal was to, “Defund, delay and defeat Obamacare.”The Congresswoman also printed off an article from the Wall Street Journal for us all and maintained that entitlement spending cannot be defunded and talked about the “auto-pilot” spending, as well. She stated that they would rather leverage the debt ceiling because the President wants to end the sequester. She felt that this would mean the Republicans could then cut Obamacare mandatory spending. We asked her to stand with us in defunding Obamacare by supporting the Graves Resolution CR. She and her aide both said they felt it was not possible, but they thanked Graves for putting pen to paper and trying. They added that it had to be looked at by the rules committee and we’d have to see if it made it through. While I am no expert on defunding Obamacare, I agree with Heritage Foundation, Freedomworks, Senators Lee and Cruz, Representative Meadows and other conservatives who have explained ad nauseam  exactly how it can be done.Both she and her aide mentioned government shutdown and I responded with the fact that the government would not shutdown essential services that are deemed essential by OMB. We also made sure to remind her that we know that the House defunds mandatory spending every year through CHIMPS. While we didn’t have answers to every point they made, I think we did a decent job explaining that we know Obamacare can be defunded.[…]We left the meeting feeling insulted. We all discussed the events and we seemed to all be thinking, “Hey, we are the TEA Party” and “We support Ted Cruz” while they were speaking to us.  I was honestly shocked, because I have voted several times for Foxx in elections and have always felt she was a true conservative. I called her office this morning and spoke to an intern. He did not know if Congresswoman Foxx is going to support the Graves Resolution CR.  Hannah’s blog post about the meeting: Unalienable Liberty Hannah is a 17 year old patriot who loves America and is fighting hard for conservative values.Her mom also has a blog and will be blogging about the meeting soon. I will share the link to her post, when it is up.[…]

This year, Republican primary voters have a choice to contemplate at the ballot box. Tea Party activist Phillip Doyle of Clemmons is taking on the veteran legislator.  Billing himself as a “constitutional conservative,” Doyle is stressing his opposition to big government and bureaucratic overreach.