Kay Hagan thinks businesses should be mandated to provide PAID leave to employees to deal with family concerns like childbirth or sick children.   On the face of it, that sounds really nice.  I mean, WHO could be against a mom spending time with her newborn or taking care of her sick little ones?

Never mind the fact that quite a few businesses already offer paid vacation AND sick leave to employees.

I am old enough to remember a time when a middle class parent could actually afford to stay home with the kids while the other parent worked. That phenomenon seemed to peter out in the mid-1970s.   Thanks to big government lovers in our national and state capitals,  the cost-of-living has sky-rocketed — as has the cost of doing business.

In December 2013, the cost of living rose more than it had in the prior six months. 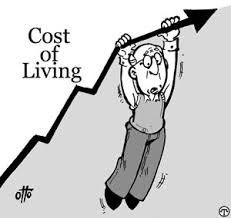 Food prices are at their highest since September 2011.  Parents’ out of pocket costs for school supplies has doubled in eight years — now exceeding an average of $600 per year.

Now, let’s look at the cost of doing business in the United States.  Right now, US businesses face a total tax burden of 46.3 percent.  The United States taxes 27.9 percent of profits, compared to an average of 16.1 percent for the rest of the world.  Canada taxes profits at 6.6 percent, and has a total business tax burden of 24.3 percent.  Mexico taxes profits at 24.1 percent, but has an overall tax burden on businesses of 53.7 percent. And you wonder why we’re getting our tails kicked on this NAFTA stuff. 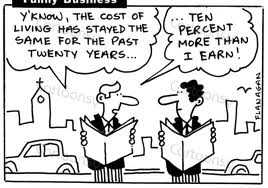 nks countries according to the ease of doing business there.  The United States ranks FOURTH overall — behind Singapore, Hong Kong, and New Zealand.  As far as ease of starting a business, the US ranks 20th out of 189 (Singapore is #3, Hong Kong is #5, and New Zealand is #1).

As far as ease of dealing with the construction permitting process goes, the US ranks 34th out of 189 (Singapore is #3, Hong Kong is #1, New Zealand is #12).  Overall fifth place Denmark is ranked #8.

The United States HAD an overall #11 ranking for ease of starting a business in 2013.  The country fell NINE SPOTS in one year.

American businesses are having a tough enough time as it is.  MAKING them pay people for staying home with the kids will be unaffordable for most businesses below the threshold of, say, Wal-Mart or IBM or ExxonMobil.  Mandates like what Senator Sock Puppet™ is proposing jack up the cost of doing business — which gets passed on to consumers in the form of higher prices or to employees in the form of reduced hours or layoffs.  Many businesses will make adjustments with — work with  — valued, respected, talented employees when things come up.

If you’re really interested in allowing people to spend more time at home with the kids, and you have a vote in the U.S. Senate, why not start working on ways — cutting taxes, rolling back stifling regulations, etc. etc. — to make it more cost-effective to live, breathe and make a living in the good ol’ U.S. of A?

2 thoughts on “#NCSEN: Paying people to stay home with the kids?”