The feud between GOP state Reps. Robert Brawley and Thom Tillis is bubbling up again here late in the 2014 primary season.  Brawley went public with his issues about Tillis, and ended up relinquishing his chairman’s gavel.  Tillis’ henchmen put the word out that even sharing a table with Brawley at lunch would be the kiss of death to one’s political career. (Flashbacks to junior high, anyone?)

Well, here we are in late April, and Speaker Thom is locked in a very tight GOP primary for US Senate.  Brawley has taken the opportunity to release a letter raising questions about Tillis, the top official in his chamber:

Which Thom Tillis are you supporting?

Republicans have a number of qualified leaders and the NC General Assembly has served North Carolina well. While I would like to thank Thom Tillis for the benefits he has helped with and while I appreciate the good accomplished, I regret the lack of input from the body as a whole. We could have helped head off the challenges we will have this fall. Following is a list of issues the Democrats will have a field day with and could quite possibly hurt the number of Republicans we have in the general assembly if Thom Tillis is our Senate candidate. We must ask ourselves:

Which Thom is he? 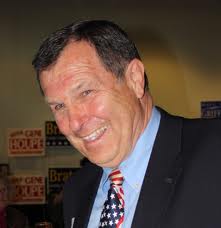 1) The Thom that favors free-enterprise or the Thom that passes legislation giving a fellow legislator’s family a monopoly business in North Carolina? This is not only unconstitutional (as ruled by judge) but also unethical and a total disregard for rule of law and the rest of the people in North Carolina. At the time the bill was passed the Department of Insurance certified more than one company as qualified to teach the course work.

2) The Thom that favors competition and free enterprise or the Thom that passes legislation that restricts the broadband companies that compete with Time Warner? Again, questionable ethics especially when you consider the campaign contributions resulting and for certain a conflict. Thom restricted city owned broadband because cities have an unfair advantage, so he says, not true. But he also favors public/private partnerships unless they compete with his friends.

2a) Thom says he favors Public/Private partnerships yet his reason for the restriction on the city owned broadband partnerships is that they allow unfair competition. Thom which is it, do you know where you are on this issue of free enterprise? Or is the one you pick the ones that deserves the benefit? Does the $39,000 campaign contribution from Time Warner affect your decision?

3) The Thom who told the Truckers Association “I do not want any toll corridors in North Carolina” or the Thom that champions toll lanes on I-77? Thom says they are not toll lanes but Hot Lanes. They still charge a toll. Toll’em Thom which is it? Hot Toll lanes?

By the way — in case you were thinking of “buying” Thom’s spin — HOT stands for ”High Occupancy Toll.” MORE:

4) The Thom that says he favors open government yet he fires a chair of finance (me) for not agreeing with him. Thom has occasionally snapped at members and visitors who disagree with him. It was also suggested to Thom’s inner circle to start rumors questioning my mental health. Is that bullying?

5) The Thom that is ethical? Read the article in the N&O about the board of governors. Why did Thom sell the seats on the board of governors? Unethical and a violation of the law. Do we need more or is there a question about what Thom really stands for other than his own advancement? The caucus voted three times on our choices for the board of governors. Thom’s friends were left off so Thom recessed the assembly, called a caucus and handed out a list of his six friends he said, due to campaign commitments, needed to be on the board. (Jim Black, Patrick Cannon, and Thom Tillis.)

6) The Thom that says he supports small business or the Thom that pushed a tax package that taxes every business making less than $225,000 per year and cuts taxes on any company making more than $225,000? If your company makes only $50,000 profit this year you will pay an additional $2,700 in taxes to North Carolina.