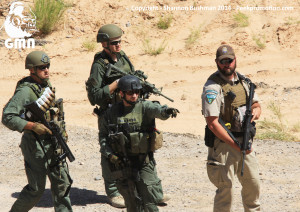 Looking at these photos, you might think they come from the battlefront in Afghanistan.  Nope. Sorry.  Actually they were taken during a repo / collection action carried out by federal agents against American citizens in Nevada.  While Washington politicians fret over how insensitive and rash it might be to kick illegal immigrants back over the Mexican border, there doesn’t appear to be a whole lot of concern about sending heavily-armed guys in body armor to collect a debt from an American citizen.

That case in Nevada brings up an interesting point.  The feds own 80 PERCENT of the land in Nevada.  That’s about the same area as the United Kingdom.  They own something like one-sixth of the land in the United States.  Did our Founding Fathers mean for our federal government to dominate the real estate and property management industries nationally?

How did we get here?  Prior to and during The American Revolution, it was not uncommon to have British soldiers bust through your front door, hold guns on your family, and do what they wanted with your private property.  Protections against that type of thing were written into the constitution.  Yet, here we are — in Nevada — more than two centuries later. 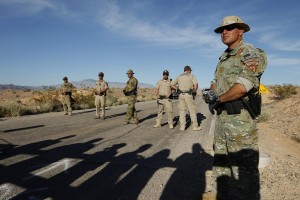 (Let’s also not forget those notorious cases in Ruby Ridge and Waco.)

Local police and sheriff departments in towns and counties of all shapes and sizes are setting up paramilitary “special response teams.”  The Washington Post is tracking the smallest towns in America that own armored military vehicles.

Some law enforcement officials may argue that they need this extra armament to deal with a burgeoning, more sophisticated, better-equipped criminal element. We posted about the sheriff of Rockingham County, NC describing how his men are often outgunned by Mexican drug cartel thugs operating in his county.  Russian president Vladimir Putin has mobilized his troops to deal with what he perceives as a national security threat on his country’s border.  It sounds like we have just cause to do something similar on our southern border — instead of terrorizing a family just trying to raise their cattle and eke out a living.

One thought on “(Meet your new mailman.) The bureaucracy locks and loads.”