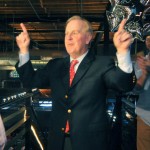 We’ve seen an awful lot of pandering, “re-positioning”, and all-out posterior-smooching from some Republican pols in this state trying to keep The Chamber crowd happy and the campaign contributions flowing.  Renee Ellmers, Robert Pittenger, and Thom Tillis have all signaled a willingness to — at the very least — look seriously at John Boehner and Eric Cantor’s legislation weakening immigration enforcement.

We posted earlier about the concerns of Moore County sheriff Neil Godfrey.   He wants the revolving door stopped.  Sam Page, the sheriff in state senate president pro tem Phil Berger’s home county of Rockingham, got the national media to shed a little light on an immigration-related problem his county is struggling with:

Outmanned and outgunned, local law enforcement officers are alarmed by the drug and human trafficking, prostitution, kidnapping and money laundering that Mexican drug cartels are conducting in the U.S. far from the border.

U.S. sheriffs say that securing the border is a growing concern to law enforcement agencies throughout the country, not just those near the U.S.-Mexico boundary.

“If we fail to secure our borders, then every sheriff in America will become a border sheriff,” said Sam Page, sheriff of Rockingham County, N.C. “We’re only a two-day drive from the border and have already seen the death and violence that illegal crossings brings into our community.”

Sheriff Page, whose county has about 94,000 residents, noted that a Mexican cartel set up one of its drug warehouses about a mile from his home.

“These men are coming into our county with more firepower than I have,” he said Wednesday. “I’m literally outgunned.”

If our so-called political leaders will not listen to the men on the front lines of this fight, we have an opportunity in May AND November to make them listen or find some other folks who WILL.