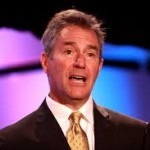 FreedomWorks — arguably One of the biggest dogs in grassroots Tea Party politics —  stepped forward Tuesday night in Raleigh to put its stamp of approval on the US Senate candidacy of Cary physician Greg Brannon.  This is the second major Tea Party-affiliated endorsement for Brannon.  US Senator Rand Paul (R-KY) formally endorsed his candidacy in 2013.

FreedomWorks president Matt Kibbe got to work on Brannon’s behalf quickly last night with an email blast to FreedomWorks supporters:

With your help Kay Hagan will be a one-term Senator.

FreedomWorks for America’s network of over 150,000 activists in North Carolina is fired up andready to send Hagan home.

But the activists know it isn’t enough just to beat Kay Hagan. We must replace her with a REAL conservative. Someone who will ALWAYS vote with the Constitution – not the Washington Establishment.

That’s why we’re proudly endorsing Dr. Greg Brannon to replace Kay Hagan as the next US Senator from North Carolina.

Greg Brannon is a true Constitutional Conservative. He will stand with Ted Cruz, Mike Lee, and Rand Paul to repeal ObamaCare and put an end to Obama’s liberal agenda.

Greg is a lifelong doctor and entrepreneur, not a career politician. He’s served the people of North Carolina as an OB/GYN for over 20 years. He’s a husband and the father of seven children. He understands the values North Carolinians hold dear. And that’s why he’s running for Senate. He wants to make sure the America you and I grew up in, an America that believes in hard work, freedom, and opportunity, is available for his children!

He can defeat Kay Hagan. But he needs your help.

FreedomWorks for America specializes in grassroots activism. We provide training, tools and materials–such as yard signs, door hangers, and bumper stickers. We have materials ready to go out the door for Greg Brannon, but we need volunteers. We need patriots to step up and distribute materials.

Will you be a distribution center for FreedomWorks for America’s network of activists today?

Campaigns come down to the number of hard-working activists on both sides. And as a distribution center you will make sure thousands of activists across North Carolina have the materials they need to get the word out and elect Dr. Greg Brannon.

I hope you will volunteer.

This move definitely sends a clear signal and presents a challenge to efforts by Karl Rove and the establishment GOP.  As groups like FreedomWorks are stepping up their game in this election cycle, news reports indicate that Rove and his war on the Tea Party are taking quite a hit.  (Rove and his allies have been helping the campaign of state House speaker Thom Tillis.)

8 thoughts on “#NCSEN: Brannon vs. Tillis. FreedomWorks vs. Rove. Game ON!”