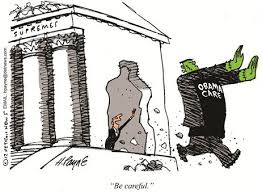 The Congressional Budget Office — long the target of much love and affection by liberals and mainstream media types — is now feeling their wrath.  The CBO dared to publish data suggesting that ObamaCare will cost the US economy 2.5 million jobs by 2017.
*Is THAT all?*

The spin defending Kay Hagan and Barry Obama’s pet monster ranged from the sublime to the ridiculous.  Let’s start with The Washington Post:

First, this is not about jobs. It’s about workers — and the choices they make.

The CBO’s estimate is mostly the result of an analysis of the impact of the law on the supply of labor. That means how many people choose to participate in the work force. In other words, the nonpartisan agency is examining whether the law increases or decreases incentives for people to work.

One big issue: the health insurance subsidies in the law. That’s a substantial benefit that decreases as people earn more money, so at a certain point, a person has to choose between earning more money or continuing to get the maximum help with health insurance payments. In other words, people might work longer and harder, but actually earn no more, or earn even less, money. That is a disincentive to work. (The same thing happens when people qualify for food stamps or other social services.)

Thus, some people might decide to work part-time, not full time, in order to keep getting health-care subsidies. Thus, they are reducing their supply of labor to the market. Other people near retirement age might decide they no longer need to hold onto their job just because it provides health insurance, and they also leave the work force.

Look at this way: If someone says they decided to leave their job for personal reasons, most people would not say they “lost” their jobs. They simply decided not to work.

The CBO, in its sober fashion, virtually screams that this is not about jobs.  (Note the sections in bold face.)

“The estimated reduction stems almost entirely from a net decline in the amount of labor that workers choose to supply, rather than from a net drop in businesses’ demand for labor, so it will appear almost entirely as a reduction in labor force participation and in hours worked relative to what would have occurred otherwise rather than as an increase in unemployment (that is, more workers seeking but not finding jobs) or underemployment (such as part-time workers who would prefer to work more hours per week).”

The CBO did look at the effect on demand for labor (i.e., jobs) but said the effects are mostly on the margins or are not measurable. In fact, in contrast to a common GOP talking point, the CBO declares that “there is no compelling evidence that part-time employment has increased as a result of the ACA,” though it notes the data may be murky because the employer mandate was delayed until 2015.

What about businesses cutting back and doing damage control in anticipation of that devastating employer mandate?

All things being equal, in a normally functioning economy, the total demand for jobs would equal 95 percent of the supply of jobs. So advocates of the Affordable Care Act should not jump to the conclusion that departing workers will be simply replaced by other workers. In fact, competition for workers will initially lead to upward pressure on wages. But over time, the nation does end up with a slightly smaller economy.

Finally, we should note that the figures (2 million, etc.) are shorthand for full-time equivalent workers — a combination of two conclusions: fewer people looking for work and some people choosing to work fewer hours. The CBO added those two things and produced a hard number, but it actually does not mean 2 million fewer workers. (This is also off a base of more than 160 million people, meaning the number of fewer workers is a relatively small percentage of the overall pie.)

*So, it’s still OK that people will be losing their jobs?*

“CBO finds that because of this law, individuals will be empowered to make choices about their own lives and livelihoods, like retiring on time rather than working into their elderly years or choosing to spend more time with their families,” White House Press Secretary Jay Carney said.

So how exactly will the law influence Americans? It is, of course, complicated.

The main takeaway is: Obamacare will affect how much Americans decide to work. Why? Benefits like tax subsidies to purchase private health coverage and expanded Medicaid are based on income. The more money you make, the fewer benefits you receive. In general, the law’s added financial security will likely give Americans a little less incentive to work.

Some Americans will therefore decide to work less. That could manifest in different ways: some people might chose to transition to part-time work; others might wait longer between jobs. One population — those nearing retirement age — might opt to retire early because the law allows them to continue receiving health coverage even if they don’t work.

News Flash:  not many people work full-time for the fun of it.  They do it because they have to. The blood-sucking bureaucrats and statists bleed so much out of our hard-earned incomes, all the while driving up the cost of living with their burdensome regulations, we HAVE to work full-time to just stay afloat.

But the ultimate impact of those decisions is the same: Americans will be working less. But not because there will be so many fewer jobs, as Kaiser’s Levitt explained to TPM.

“If you guarantee people insurance even if they don’t get it on the job and you give them help based on their income, that’s likely to lead to people working somewhat less,” he said. “That’s going to be true of any means tested program. The only way around it is not to give people the help.”

Obamacare will have some effect on businesses and how many workers they chose to employ, but the net impact is hard to deduce, the CBO reported. Parts of the law, such as the employer mandate penalty, will likely reduce the demand for workers among businesses. But that will be offset, at least in part, because of the law’s positive financial benefits, putting more money into the economy and increasing demand for goods and services. […] 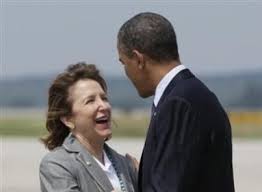 But how do you address that increased demand if you can’t afford to hire more people — thanks to this piece of legislative guano? “Reducing the demand for workers” sounds like the exact frickin’ same thing as “job killing.”

Kay Hagan told us we’d learn to love ObamaCare, if we just took time to learn more about it.  Richard Burr told us defunding ObamaCare was “the dumbest idea” he had ever heard.    The establishment — controlling both parties –is shoving this thing down our throats.  If you weed through all of the Orwellian double-speak and bovine dung, they are admitting that ObamaCare kills the initiative to work, tamps down business expansion and economic growth, and pushes more people toward dependence on the government.