A lot of folks sit around scratching their heads wondering why MORE quality people don’t step forward to offer themselves up for public service.  Well, after looking at some of the outrageous slander regarding the NCGOP chairman candidates that has poured over the transom to us in recent weeks — under fake names and email accounts, of course — I can understand why.

I had at least TWO geniuses try to convince us that A.J. Daoud was mobbed up.  That’s right.  A pal of Tony Soprano.  The “documentation” they sent along was so weak, we laughed and shook our heads in dismay.  Talk about some WEAK B.S. 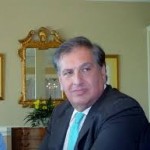 (Oh, by the way, if you have real knowledge of someone committing criminal deeds, go to the cops. NOT us.)

Daoud has distinguished himself as a police officer and businessman and has been an outstanding community leader in his current hometown.  I’ve never met the man, but Daoud strikes me as a class act.  His decision to step out of the race at the last minute probably played a major role in doing in establishment favorite Craig Collins.  If he’s seriously interested in remaking the party to be more responsive to the grassroots, I sincerely hope he will be welcomed with open arms into a leadership role of some kind.

been counted and he’s been sworn in as party chairman.   I had some genius — under a fake name, of course — send me a link to one of Hasan’s blogs.  This slander monkey tried to claim it proved Harnett is a full-blown disciple of witchcraft — the dark arts.

What was so “disturbing” about said blog?  Harnett was speaking favorably about the message in the best-selling book “The Secret.”  A book that has been praised by Pat Robertson’s crowd — some other well-known practitioners of the dark arts.

Let’s look at what had this slander monkey so upset — after the vote — about Harnett:

[…] On one hand, many of us subject ourselves to what we DON’T HAVE like:

On the other hand, there are people who stand on top of what they don’t have by saying “I HAVE”.  For example, when someone comes along and says “I HAVE” they are basically saying “I HAVE a state of consciousness of all that I need”.  The “I HAVE” mentality produces sweet thinking.  Sweet thinking is like a positive crop that gets harvested over and over again within the land of abundance.  The byproduct of this crop yields and reproduces unlimited possibilities in the land of abundance.

When we channel our thoughts we create, harvest, and reap our own realities.  In the land of abundance, our thoughts either produce stinking thinking or sweet thinking crops.  Thus, your biggest responsibility is to have clarity of thinking by defining your goals and figuring out precisely what you want.  Your second biggest responsibility, despite all odds, is to move closer towards your goals (on a daily basis).  This is the difference between I DON’T HAVE and I HAVE.  Your thoughts are the invisible things that manifest into tangible realities.  And all things remain forever possible.  You can do, be, and have anything you want based on your capacity.  Be encouraged to think and grow rich.[…]

Hmmm.  Sounds a lot like the free market gospel.  Or even Norman Vincent Peale’s “The Power of Positive Thinking.” Work hard — and think

positively — and you will, in all likelihood, reap the rewards of your hard work.  I thought that was the kind of thing we want preached from sea to shining sea.

Oh, and it gets, um, *better.*  Several anonymous folks have sent me links to state board of elections records showing that Harnett voted in the Democrat primary in 2008.     Let’s harken back to 2008, folks.  By the time May rolled around, John McCain had sewed up the GOP nomination for president.  A guy you may have heard of — named Rush Limbaugh — was encouraging something called ”Operation Chaos.”

Operation Chaos involved getting conservatives to switch to Democrat and to vote for Hillary Clinton against Barry Obama.  By Rush’s thinking, that would drag out the Democrat primary and make them beat each other up  and blow more money fighting each other.  Perhaps Harnett was taking part in that.  (A lot of good conservatives from across the country did.)  Has anybody bothered to ask him?

For what it’s worth — Walter Jones served in the state legislature as a Democrat right up to the point he first ran for Congress.  I’m sure he voted in a few Democrat primaries.  Lauch Faircloth was a longtime Democrat activist — and cabinet member for a Democrat governor — before landing in the US Senate.  A guy named Jesse Helms was also a Democrat right up until he first ran for the Senate in 1972.  All three of those guys turned out to be great Republican leaders.

This kind of stuff is ridiculous, old and tired.  At a time when we ought to be plotting a course for the future of this great state and nation, we are busy making up stuff trying to tear down people personally.