A Republican state representative from Union County says he wants to represent his fellow North Carolina Republicans on the Republican National Committee. 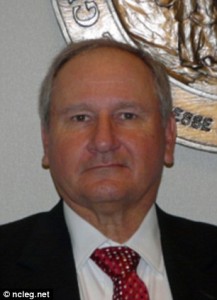 The RNC allows for two elected committee members from each state — typically one man and one woman.  North Carolina is currently represented by Ada Fisher and state Rep. David Lewis.

This decision by Rep. Mark Brody would likely mean a political clash with Lewis, a fellow Republican in the state House. Brody has racked up a conservative record while in the House — opposing the ConnectNC bond issue and amnesty-related issues like licenses for illegals.

Lewis, on the other hand, was the only Republican in the state House to vote FOR ObamaCare. He shepherded legislation through the House to allow legislators to bypass the state party on fundraising matters.   He’s been the subject of two high-profile stories recently suggesting pay-to-play.  Lewis also recently survived an impeachment attempt by several state GOP leaders.

This quote by Albert Einstein is becoming more of a reality every day. The fabric of our nation is unraveling one thread at a time and the Republican Party needs to take a clear stand for what is right before our nation unravels at the seam.

North Carolina’s Republican Party platform represents pure constitutional principles that form the basis of our state’s economic and social direction and its success is backed by actual results that have exceeded our expectations. As a constitutional-centered Republican, I am committed to religious liberties, free market principles, limited government, the rule of law and not man, and the elimination of destructive over-regulation.

Most importantly, I am an unashamed and unapologetic Christian and will not hesitate to publicly recognize that the blessings of this nation are from the hand of God, through our Lord Jesus Christ. My fellow Republicans, these are the North Carolina values we desperately need woven into the National Republican Party before it is too late.

And that is why I am formally announcing my candidacy to run for the North Carolina National Republican Committeeman position. As Committeeman, I will take a firm stand to uphold our conservative values and will not back down from political pressures or play a puppet on a string.

My 100% conservative rating from the American Conservative Union, based on my voting record in the NC General Assembly, proves I am a consistent conservative and someone who will stand on principle and this is what you can expect at the national level if I am elected Committeeman. I humbly ask for the opportunity to represent North Carolina’s Republican Party at the national level and show my commitment to repairing our nation’s fabric back to its days of glory.

13 thoughts on “#ncga: House’s Brody seeks to represent North Carolina on the RNC”