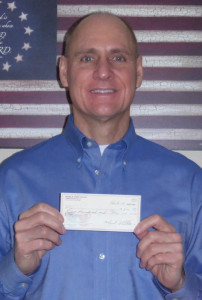 Mark Villee, like a lot of us, takes exception to his character being assailed.  The Republican challenger to state Rep. Nelson Dollar (R-Cary) was recently described as “desperate” and a ”lying” in a television ad produced by the Dollar campaign. Dollar’s ad was in response to THIS AD from Villee.   Dollar claimed that he filed a ”cease and desist” request with Time Warner to stop the Villee ad.

” I take very seriously accusations that relate to my character. I challenge Nelson Dollar to substantiate his claims,”   said Villee in a statement to our site this morning. “My ads are straight forward and to the point.  Nelson Dollar is simply not fiscally conservative.  Dollar offered a budget that increased spending by over a billion dollars, but now takes credit for a tax cut that was pushed by conservatives opposed to Dollar’s wasteful ways.   Dollar opposed his own party’s conservative medicaid reforms, going so far as joining House Democrats in voting against the Medicaid reform bill that was signed into law by Governor McCrory.”

Like us, Villee is puzzled by Dollar’s claims of “lying” in the Villee ads.  The Villee campaign is even stepping forward with a challenge:  They will donate $500 to the local faith-based charity of Dollar’s choice if he can successfully and credibly prove the existence of any “lies” in Villee’s ”Change for a Dollar” advertising.

“I’ll put up my own money on this one,” Villee said. “The check is written and waiting.  I believe the truth is on my side and Nelson Dollar’s definition of lying is much different from those of us who live our lives in the real world.  Nelson Dollar’s bullying tactics may work in the General Assembly, but they won’t work on me.”

Hmmm.  This could get even more interesting.

Sources close to Villee tell me that there is also a problem with Dollar’s ”cease and desist” claim. Said one source:

“We checked with Time Warner as far off as Texas.  They told us they can’t find anything from Mr. Dollar, much less anything coming close to being a cease and desist request or order.  They told us ‘Hey, we’d call you if we got something like that.’  And they haven’t called.”

Hmmm.  Playing fast and loose with the facts?  Sounds kinda like the whole Board of Governors thing.

One thought on “#ncga: Putting your DOLLARs where your mouth is?”