There is an interesting strategy being put forth by NCGOPe types this cycle.  Put a lot of bad news out there, and demand MO’ MONEY. 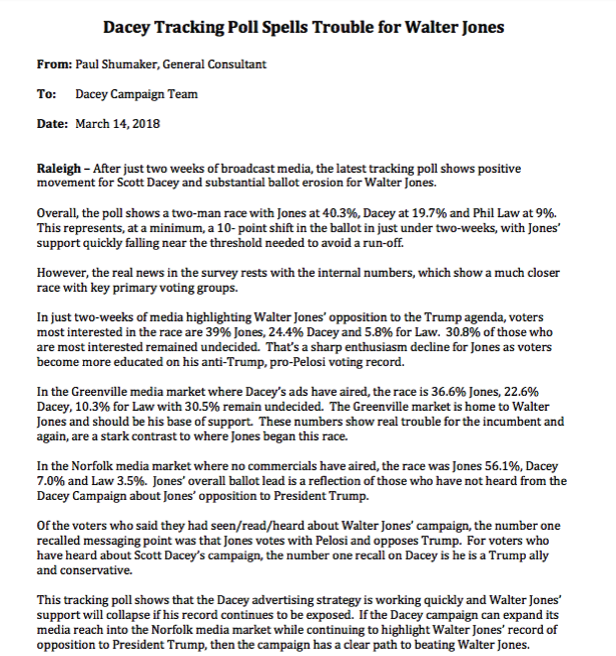 Okay.  Let me do a little translation for you.  Team Dacey did something called a “push poll”  — where you call potential voters and feed them slanted, negative information about your opponent with the hope of driving your

opponent’s approval numbers down.  This can be confirmed by the phrase in the second to last paragraph: “[…] the number one recalled messaging point was that Jones votes with Pelosi and opposes Trump.”

According to Conservative Review,  Walter Jones (score of 86% or B) is the third most conservative member of North Carolina’s US House delegation.  He is behind only Ted Budd (100% or A) and Mark Meadows (95% or A).  Shumaker’s other congressional candidate engaged in a heated primary, Robert Pittenger, gets a grade of 55% (F) from Conservative Review.

Mark Meadows has campaigned with Jones.  I can’t imagine him cheerleading for someone who would simply fight Trump and back Miss Nancy.

The Shumaker memo describes Jones’s numbers as “falling near the

threshold needed to avoid a runoff.”  The legislature, this past session, reduced the threshold from 40% to 30% to avoid a runoff.  So, even if you take the findings in this memo seriously, Jones still has a ten point (or more) cushion.

After all that — keep in mind that these numbers follow a roughly $250K media buy by the Dacey campaign.  Which appears to have resulted in a consistent 30% undecided finding and third-place Dacey finish (behind Jones and UNDECIDED).

13 thoughts on “NC-03: Dacey’s own #’s show a loss to Jones AND somebody named UNDECIDED.”