Tea Party groups across the state and the Brannon for US Senate campaign are quietly lining up supporters to attend a “FreedomWorks BBQ” in Raleigh on Tuesday evening. Sources familiar with the event’s back story say that this event can be inferred as a coming-together of the Brannon campaign and the national, high-profile Tea Party-affiliated political organization. 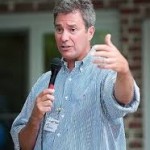 An alliance with FreedomWorks enhances Brannon’s street cred with the Tea Party, adds more grassroots organizing tools to his arsenal, and will likely aid his advertising and fundraising operations.  Polling and fundraising reports indicate that Brannon and GOP establishment favorite Thom Tillis are the frontrunners in the GOP primary field.  Tillis has already received overt political and financial support from national GOP establishment figures like Karl Rove, Mitch McConell, and John Boehner.