Speaker John Boehner, who Renee Ellmers says is her ”boss”, went back to his Cincinatti-area district to call out Tea Partiers and other amnesty opponents on The Hill and around the country:

House Speaker John Boehner theatrically mocked his fellow Republican Congressmen for being afraid to reform immigration policy when he spoke Thursday before the Middletown Rotary Club in his home district.

“Here’s the attitude. Ohhhh. Don’t make me do this. Ohhhh. This is too hard,” Boehner whined before a luncheon crowd at Brown’s Run County Club in Madison Township.

Boehner said he’s been working for 16 or 17 months trying to push Congress to deal with immigration reform.

“I’ve had every brick and bat and arrow shot at me over this issue just because I wanted to deal with it. I didn’t say it was going to be easy,” he said.[…]

Days earlier, Boehner described himself and his leadership team as “hell-bent” on getting something

PJMedia says all you need to do — to understand what Team Boehner is up to on this issue — is keep an eye on Renee Ellmers:

This brings us to today’s maddening stasis, and the Byron York piece. As York states, the House GOP caucus isn’t merely opposed to moving significantly on amnesty, it’s about 90% opposed — perhaps Boehner and Cantor could peel off only 20-30 votes out of 232 Republicans. Yet despite that advantage, the 90% now sits pat, waiting for Boehner and Cantor to actually, inarguably, undeniably show their cards, whatever that action might entail.

Why are they waiting to act? Truly, I don’t know why. I could prattle on game theory and risk management, but really, no one could possibly offer a sufficiently logical reason for the wait-and-see.

But the GOP electorate must convince them to act — and to act immediately. Boehner and Cantor are likely prepared for a post-primary amnesty push. And only a pre-primary, preemptive attack can halt this amnesty drive by House leadership in tandem with locally corrupt party tacticians like the RPV.

As the 90% clearly requires further convincing, do suggest they pay attention to the behavior of arguably the least-talented GOP politician in the House. They must know about Renee Ellmers, by all accounts a Boehner acolyte and confidante. Ellmers is their “tell”; she parrots Boehner’s behavior and talking points, but lacks the political acumen or knowledge of the amnesty issue to effectively keep the caucus waiting, as Boehner and Cantor have. 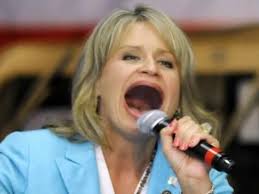 On Monday, Ellmers put out a breezy press release titled: “Congresswomen Renee Ellmers: A Busy and Beautiful Spring Week in the Second District.” She spent part of April 15 that week attending an amnesty friendly presentation by two University of North Carolina professors. Here she is, in the yellow:

During the event, Ellmers asked her scripted series of questions:

“Are they taking jobs from Americans?” asked Ellmers of UNC-Chapel Hill Professors James H. Johnson and Stephen J. Appold who were presenting the report “Demographic and Economic Impact of International Migration to North Carolina.”

“Is the migrant population underpaid? Is there evidence that those who are hiring undocumented workers are not being reported? Did it factor into your research?” asked Ellmers.

Of course, when you think of Ellmers and amnesty, you can’t forget THIS and THIS.

This is what they’ve been saying.  Until May 6, we’ve got a chance to respond — to make our voices heard in Raleigh and Washington LOUD and CLEAR.