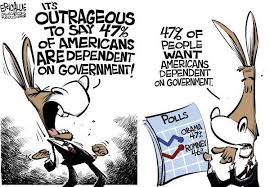 That’s the thesis of an eye-opening essay on The Federalist web site:

President Obama’s most recent budget makes it clear, the Wall Street Journal says, that while Republicans need his signature “to arrest America’s coming fiscal crackup,” they’re “unlikely to get even the back of his hand.”

Nobody, least of all the addict, likes to address an addiction. But, at some point, adults have to walk into the room and take charge. One hopes they don’t wait to do so until the addict’s self-destruction is complete. But the window of opportunity for an effective intervention on this country’s behalf is closing, rapidly. The next presidential election may be it.[…]

What is the author talking about?  Dependency, and how it is breaking our country fiscally and spiritually.  Right now, she points out that for every 100 people out there busting 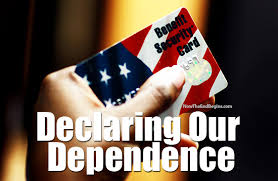 their butts to make a living, there are 59 who are living off the labors of those 100 people.  The Census Bureau  estimates those numbers to climb — by 2030 —  to 76 dependents for every 100 working people.  MORE:

A sobering new report points out yet one more factor accelerating that window’s downward fall. It considers the ratio of people who eat tax dollars while generating little to no tax revenue against the people who generate the tax revenue that pays for the others. You might think it’s a comparison of welfare cases, but it actually measures the dependency ratio with the very young and elderly on one side and people of working age on the other. Children consume public resources (primarily through school, but also a huge proportion of them receive government healthcare) without, obviously, creating any; and through Social Security and Medicare, so do retirees. And this country will presently see a boom in children at the same time it sees a boom in old people, thus sharply increasing draws on public coffers. “Multiple states are projected to have one in four or more residents who are elderly [65 years or older],” the Foundation for Excellence in Education-Friedman Foundation report says.

Sobering stuff, huh?  Well, what can we do about it?  The author of The Federalist piece has at least five solid proposals:

[…] This one is a favorite hobby horse of mine precisely because it is so powerful yet so overlooked. A major casualty of the culture wars and its resulting relativism has been the loss to American children of a systematic, conscious hand-off of their heritage. Those of us who have been granted some of this access to our cultural history will recall that in ancient days, when “every man did what was right in his own eyes,” it meant chaos. And chaos serves no one well but bullies. The weak are the ultimate losers, and children are always weak.

As with the insistence that “multiple definitions of family” work out just fine for the kids, so insistence that kids need to learn nebulous things like “collaboration” and “critical thinking,” that they don’t need “rote memorization of dry facts” but “to learn how to learn through open-ended problems,” harms kids. You will recognize these as the mantras of every teacher or curriculum specialist ever interviewed by any reporter nowadays. Taking no position on what, exactly, kids should learn serves adults who need widespread approbation to maintain their power, but it ends up depriving children of what society owes them: A good education that prepares them to contribute. And research resoundingly demonstrates that a content-haphazard education will leave a child poorly equipped both to think and engage in his culture. As E.D. Hirsch, the apostle of these insights, writes, “Verbal skill is known to be a chief constituent of adult success and effectiveness. But verbal ability is not, as the schools wrongly assumed, simply a how-to skill. It is largely a knowledge-based skill.” […]

One thought on “The U.S.’s coming demographic suicide?”