Our state’s drive by media continues to be obsessed with all things transgendered and urinary.  Yessirree. HB2 managed to poke itself into the candidates debate for state treasurer last night.  Never mind that Dale Folwell is arguably the most qualified person in over a generation to seek this office, and that Dan Blue III is NOT EVEN CLOSE and  is merely using this race as a stepping-off point into state politics.

Inquring minds WANT TO KNOW:  Where are dudes in lady-clothes going to potty?  Here’s Jim Morrill, who clearly has been spending too much time around Colon Campbell:

Republican Dale Folwell and Democrat Dan Blue III sometimes grew testy during their hour-long debate in Statesville. Both are trying to succeed Democrat Janet Cowell, who’s not running for re-election.

The meeting was one of three “Hometown Debates” by the N.C. Institute of Political Leadership and aired on radio station WPTF.

In a crowded election year, it’s one of the state’s lowest profile contests. A survey this month by Public Policy Polling showed Blue leading 38 percent to 37 percent, a result well within the margin of error. The poll also showed one out of four voters undecided.

Yeah. *So, we’re going to quiz the candidates on important stuff — like trannies in the toilets.* MORE: 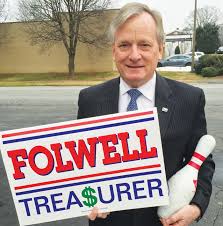 The treasurer oversees the state’s $90 billion pension fund, which supports over 900,000 current and former teachers and other public employees, and administers the state health plan.

Falwell, from Winston-Salem, is an accountant and former legislator and former assistant secretary of commerce. Blue is from Raleigh. He’s a bond attorney and former investment banker who once started his own health care business.

Among the subjects they debated:

? HB2. The two were asked about this week’s call by over 50 investment managers with more than $2.1 trillion under management for a full repeal of North Carolina’s HB2, the law that limits protections for LGBT people, and requires transgender people to use the bathroom of the gender on their birth certificate in schools and government buildings.

“The fact is that one day … HB2 will no longer be an issue because it’s in the court system,” Folwell said. “I had nothing to do with HB2, and I’m unaware of any bathroom issues occurring at the state treasurer’s office.[…]

Of course there’s no mention of the fact that said “investment managers” were less-than-a-handful of glorified shakedown artists who excel at using other people’s money as leverage for accomplishing leftist political objectives.  I seriously doubt that $2.1 trillion figure, as well.  Lefties can put something in a press release and the drive bys run with it.  Kind of like those radically different numbers on homeless people and illegal aliens that get bandied about the drive by media.

(*I can do this too. Ahem — the driveby media has told SIXTY ZILLION LIES about Republican candidates since July 1.*)

Morrill and the other drive bys seemed to forget that their colleague Laura Leslie already confessed that there is NO EVIDENCE HB2 has hurt, or will ever hurt, North Carolina’s economy.

The drive bys found time to quiz Dale Folwell about HB2 but couldn’t manage to talk about (1) Dale’s leadership in erasing a $3 billion debt owed by NC taxpayers to the feds, and (2) whether Blue’s law firm will be giving up all that business the state treasurer currently throws to it.

It’s a shame, given the growing concern out there about the state and national economies, our lazy drive by media is fixated  on potties like a cat on a pen-light.

2 thoughts on “The treasurer’s race. Yeah, that’s gotta do with toilets! (Um, right?)”