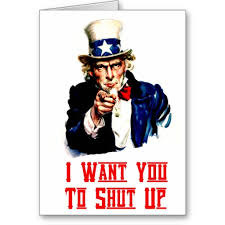 During The Cold War, leftists rolled their eyes at us when we talked of the horrors perpetrated by The Communist Party.  Fast forward to today.  Cold War and KGB relic Vladimir Putin oversees the deployment of some anti-gay laws, and the left goes bat-$#@t crazy.  You would think  — in 2014 — there was mass murder in gulags going on.

In our very own Chapel Hill, lefties fought hard in the 60s to overturn a state-mandated speaker ban against radical left-wing on-campus programming.  The Free Speech Movement was what it was called.

The speaker ban was overturned.  You would have assumed that the lefties would have been ushering in a new era of free expression.  Nah.  Conservative speakers are regularly harassed and run off campus.

About a month or so ago, Brendan Eich –one of the founders of Mozilla — was run out of the CEO post for the company he helped found.  His offense?  He wrote a check to the PAC supporting traditional marriage in California.  He had no record of harassing or discriminating against gays in his business dealings.  Someone searched campaign reports and found his name.  Then, all hell broke loose.  All because Mr. Eich practiced his First Amendment rights.

Now, comes the whole nonsense with the L.A. Clippers.  For the record, I couldn’t care less about the NBA. I used to enjoy it in the days of Kareem, Magic, James Worthy, Dr. J., Bobby Jones, Danny Ainge, Dominique Wilkins, Michael Jordan and Larry Bird.  Those class acts have been replaced with gangsta wannabes playing a very selfish me-me-me game.

This Clippers owner — Sterling — is not someone I really want to break my neck defending. He ran around on his wife with a bunch of hussies and dumped a bunch of money on far-left causes.  One of those hussies apparently got mad at Sterling and taped him during a rather profane, heated argument.  That tape “magically” ends up in the media.

We’re hearing more about this whole thing in North Carolina than we are about our very important US Senate race.  President Obama is being asked about it while meeting overseas with foreign leaders.  Meanwhile, Russia and Ukraine are ready to go to war, ObamaCare is destroying our health care delivery system, and our economy is still languishing.

Today, we hear that Sterling is being banned from the NBA for LIFE.  We also hear the league will force him to sell his team.  Seriously?  This will be the second major case in a few months where a PC lynch mob has run someone out of their own business for saying or doing something they felt was inappropriate.  There is an idea floating about proceeds from the sale of the team going to organizations that “fight bigotry.”

Wow.  It is truly frightening that we’ve become a society that tolerates lynch mobs ruining people who dare to go against the grain. What does this whole Clippers kerfluffle have to do with my life or yours?  What has become of this country – -this society?